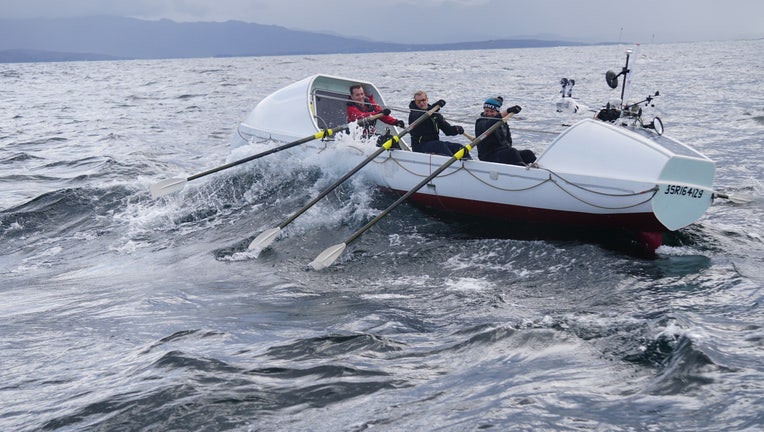 These men will row this boat from South America to Antarctica next week in the latest adventure of a lifetime of them for a Minneapolis man. ( Chelsea Dutchik )

MINNEAPOLIS (FOX 9) - A Minneapolis man leaves Thursday for a trip that will test his endurance and makes any other vacation look like child’s play.

If the weather holds, Andrew Towne and five other adventurers will set off next Monday into some of the roughest waters on the planet in a row boat.

Connecting South America and Antarctica, the Drake Passage is a notoriously rough stretch of sea. This Minneapolis man hopes to conquer it in a row boat.

In Towne’s Minneapolis condominium Wednesday, he was packing for this unusual vacation to South America and then Antarctica.

A few weeks ago, Towne flew to Scotland to spend a few days with his international teammates. There, they conducted a practice run of their planned 24-hour cycle of rowing and resting.

“You almost feel like you’re in a time warp,” he said.

Soon, he and his colleagues will start doing that cycle for a week and a half straight in much tougher conditions documented by the Discovery Channel.

“You’re rowing, then you have 90 minutes where you quickly eat and drink something, sleep for 60 minutes and then you wake up and you’re back out to row some more,” he described.

Two years ago, Towne scaled Mount Everest, finishing a quest to climb the tallest mountain on each of the world’s seven continents.

As a national champion rower in college, this next challenge fit well.

“Our row aspires to be a world-first unassisted, human-powered row across the Drake Passage,” he said.

The Drake Passage is about 700 miles from Chile to Antarctica. Nobody has done it without a sail or a motor and its reputation is rough.

“It’s known to be some of the worst water in the world,” Towne said. “So, we’re expecting ocean swells of up to 50 feet, icy water, especially as we approach Antarctica.”

Towne’s been packing for all the fixings of extreme adventure.

“When things get really hairy, we’ve got the full Gore-Tex parkas,” he said.

You have to take everything you need for the voyage, but it can’t be much. Plus, you have to prepare for the worst.

“I’ve survive blizzards and avalanches on some of the biggest mountains in the world, so I know about hunkering down for multiple days in bad weather and getting bored out of your mind trying to survive,” he said.

It’s no all-inclusive cruise, but that’s not Towne’s kind of vacation anyway.

“Not to make a rowing pun, but different strokes for different folks,” he laughed.

The team is planning for a nine or 10-day trip if the weather stays calm, but they’re bringing enough food for three weeks in case it doesn’t.