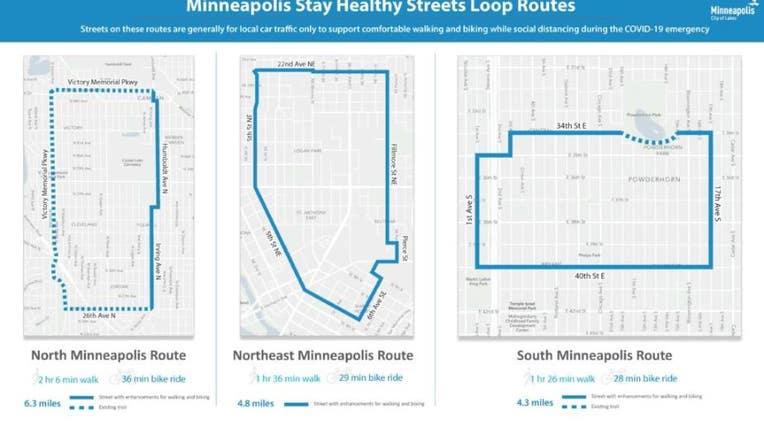 MINNEAPOLIS (FOX 9) - The City of Minneapolis is planning to open more streets up to pedestrians and cyclists in order to help people better follow social distancing guidelines while outdoors.

Starting Wednesday, the city will designate 11 miles as "Stay Healthy Streets" routes, which will create three separate routes along mostly residential streets. There will be a route in North Minneapolis, Northeast Minneapolis and South Minneapolis.

The streets will mostly be closed to through traffic so people can walk or ride in the street. Residents will still have street access and for the most part, parking should not be affected.

For more information about Stay Healthy Streets and maps of the routes, click here.

There's also a new loop for pedestrians and cyclists along the Mississippi River. The southbound lane of East River Parkway in Minneapolis and Mississippi River Boulevard in Saint Paul have been opened from Fulton Street Southeast to Ford Parkway. The cities of Minneapolis and Saint Paul are planning to create extra space on bridges to complete a connected six and 10-mile loops.

City crews have also automated the traffic signals for pedestrians so that they no longer need to push the button. For those who are visually impaired, the button will be still be operational in order to get the audible features.