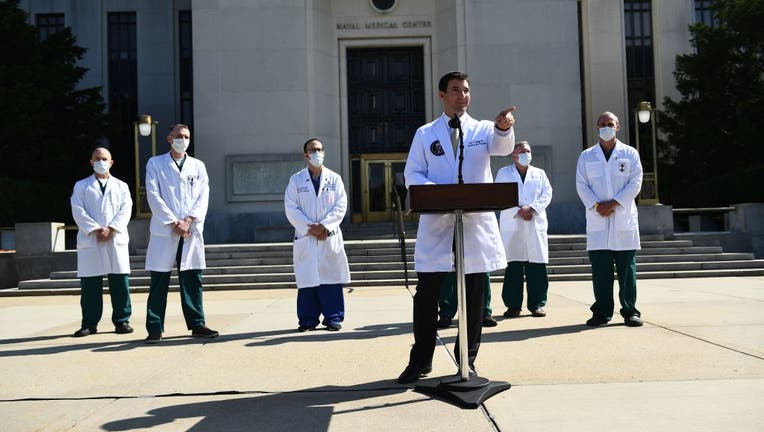 FILE - White House physician Sean Conley answers questions surrounded by other doctors, during an update on the condition of US President Donald Trump, on October 4, 2020, at Walter Reed Medical Center in Bethesda, Maryland. (BRENDAN SMIALOWSKI/AFP via Getty Images)

(FOX 9) - President Donald Trump returned to the White House Monday evening after being treated for COVID-19. The president’s care has renewed a lot of questions about how doctors treat COVID-19.

As researchers pave the way toward a COVID-19 vaccine, they are also focusing on how to better treat the disease.

President Donald Trump returned to the White House Monday evening after being treated for COVID-19. The president’s care has renewed a lot of questions about how doctors treat COVID-19.

“We think that the current standard of care right now depends upon the disease severity,” said Dr. Sean Caples, an intensive care pulmonologist at the Mayo Clinic.

But in those severe cases, one of the options is the same steroid doctors have administered to the president. It’s called dexamethasone, which helps reduced inflammation in the lungs.

Research recently published in the Journal of the American Medical Association stated that “…the administration of steroids is clearly associated with benefit among critically ill patients with COVID-19.”

Dexamethasone treatment was shown to reduce mortality by about one third for patients on ventilators, according to the World Health Organization.

“We generally feel that drug is best served for patients with more severe disease. So, those that might require moderate amounts of supplemental oxygen and those who are on a ventilator or breathing machine,” Caples said.

Dexamethasone is readily, widely available and has been around for decades, according to Dr. Caples.

“Some of the other drugs, Remdesivir is another commonly utilized drug, may not be quite as available. It is at most large institutions. And then we’ve heard about for example, the antibody cocktail. That is probably something that isn’t available to most people outside of what we would call a clinical research trial,” Dr. Caples said.

Treatments and research is still evolving. At the Mayo Clinic, they have a panel of experts that meets every day to review each patient and decide the best treatment for them, according to Dr. Caples.