MINNEAPOLIS (FOX 9) - Minneapolis officials said Tuesday they have identified approximately 700 buildings that sustained some sort of damage during the riots in the wake of George Floyd’s death.

The City of Minneapolis has released a map showing the extent of the damage from the riots, giving the public a sesne of the areas most impacted. The map shows most of the damage was along Lake Street. 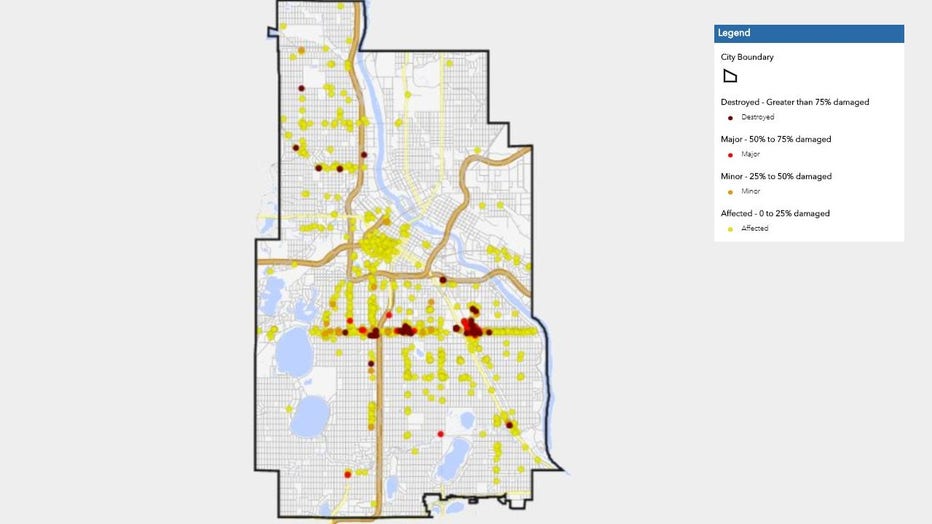 A map showing the Minneapolis businesses damaged in the riots in the wake of George Floyd's death. (FOX 9)

A link to the map can be found here.

Of the 700 buildings that were damaged, 12 were completely destroyed and had to be demolished for public safety reasons.

“Within those properties though there were several store fronts. So a property could have had several businesses in it, residences above it, and so while the number may not be a very large number understand the impacts of that are very great,” said Steve Poor, director of development services.

The City of Minneapolis is working to help residents and small businesses recover after the riots.

Damaged businesses can also help resources from the city here.

Volunteers helped clean up the debris from the riots. Robin Hutcheson, the director of public works, said her department removed 115 tons of garbage from street corners that volunteers placed there for them to pick up as well as 10 tons of recycling and 14 tons of debris from demolitions.

While city officials are still assessing the impact the last few weeks had, they know it is greater than just the damage to the properties.

“Damage is something we can quantify, and it’s going to take a long time to determine that figure,” said Erik Hansen, director of policy and economic development. “But, impact is across the board and it is disproportionally impacted neighborhoods that were already suffering from displacement and economic downturns.”