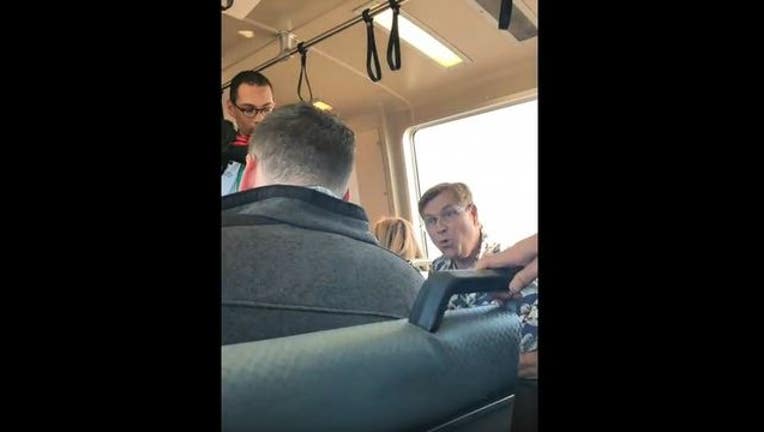 OAKLAND, Calif. (KTVU) - A passenger tried to alert BART police after he noticed a fellow traveler eating a burrito on the train.

The incident, which occurred Friday around 6 p.m. on the Dublin/Pleasanton line near the Fruitvale station, was captured on cellphone video and posted to Reddit.

The video, posted by R0b815, shows a man in a Hawaiian shirt asking another man to get off the train since he's eating. He raises his voice as he says, "You can't wait. A sign says no eating and drinking. You don't get it? You don't get it. You must be stupid. I've seen people like you on TV."

The man ignores the comments as he continues to enjoy his burrito.

That's when the man in the Hawaiian shirt escalates the situation by trying to alert BART police. The video shows the man walking over to the BART intercom. As he punches the intercom button he says, "Yes please, can you get a policeman on board here. We got someone dining in the first car. Number 356. He's dining - dining - eating on the train."

Other passengers begin laughing as someone says, "People do worse things on BART."

BART spokeswoman Alicia Trost tells KTVU no calls or BART App Watch messages came in about someone eating a burrito on a train over the past week. She says the intercom does not reach BART police, but it allows communication with the train operator.

The man, who was eating the burrito then gets up from his seat and ready to exit at the Coliseum station.

A woman can be heard asking the man in the Hawaiian shirt, "Do you not ride BART much?" And he says, "I ride BART more often than you - I see you in here all the time." She mentions that some people shoot up on BART saying, "this is not our concern... he's not our concern."

The man in the Hawaiian shirt appears to be pleased the man got off the train saying, "now he can go eat."

Trost tells KTVU eating on a train is a violation and could result in a citation or warning.