Man aims to visit every Starbucks store on earth

Last week, Winter hit a milestone of visiting his 15,000th Starbucks in Peru.

LIMA, Peru - After hundreds of thousands of dollars and millions of miles traveled, one man is more than halfway to his goal.

The 47-year-old, whose full legal name is Winter, is on a personal mission to drink coffee at every Starbucks location in the world. The international coffee chain opened its 30,000th store earlier this year in Shenzhen, China — and continues to expand.

Last week, Winter hit a milestone of visiting his 15,000th Starbucks in Peru. He said he typically prefers drip coffee, but ordered a Colombia Nariño Latte Macchiato for the momentous occasion.

Winter has visited nearly 12,000 locations across the United States and Canada. He has also stepped foot in more than 3,000 international stores in dozens of countries around the world, including locations in India, Japan, Egypt, France and Costa Rica.

He meticulously documents his visits with photos on his website, StarbucksEverywhere.net, and shares updates on social media.

“Usually I go in, I talk to the manager, explain what I’m doing, asking for anything that’s unusual about the store and any stores that I might have missed in the area that I might not be aware of,” he explained. “I ask for sample coffee, and I’ve gotten a sample coffee from over 95 percent of Starbucks that I’ve been to.” 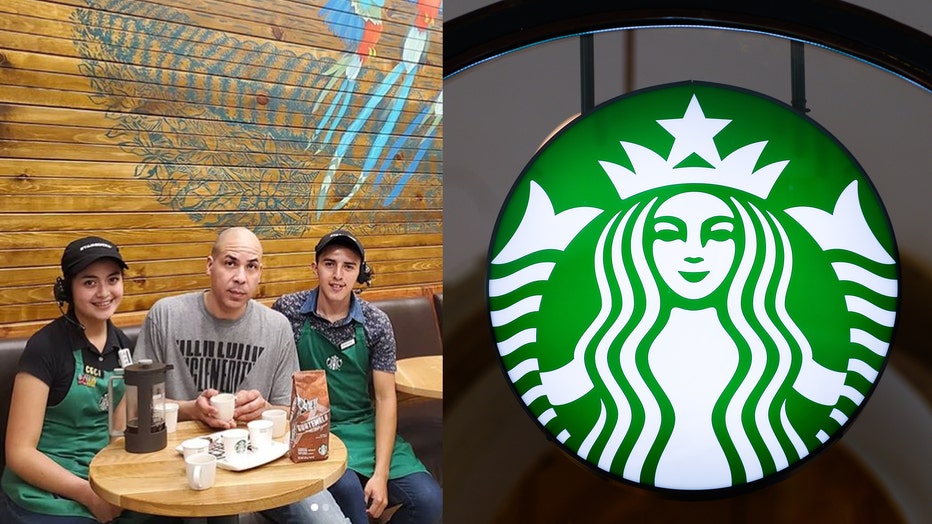 Winter is pictured with two Starbucks baristas at a location in San Cristobal, Guatemala, alongside a file image of a Starbucks sign. (Photo credit: Winter and Omar Marques/SOPA Images/LightRocket via Getty Images)

Winter said when he’s on a blitz, stopping into as many Starbucks locations in a row as time allows in his travel plans, he’ll just go in and pay for coffee without pausing to chat.

Winter has been featured by dozens of media outlets and starred in the 2007 documentary, "Starbucking." He periodically gets recognized from the publicity he’s received over the years.

“Sometimes, I’ll tell them what I’m doing and they’ll have heard of me and we’ll get into a five or 10 minute conversation,” he said. “They might want a selfie for the Instagram, and I love that kind of stuff. I love meeting new people and talking to people.”

In addition to “Starbucking” as he calls it, Winter stays busy working as a contractor in computer programming. He also takes care of his mother who lives in Panama, is a tournament Scrabble player, runs and does kickboxing — among many other things.

“Because I work as a contractor, I’m not limited to two to four weeks of vacation a year. I can take as much time off as the schedule and my personal budget allows,” he explained. “That’s been crucial in getting up to 15,000 stores in the last 22 years because typically I have only worked six to nine months out of the average year.”

Winter, who is originally from Houston, said he didn’t start drinking coffee until his third year at the University of Texas.

“Starbucks didn’t get to Austin until late 1994,” he said. “I personally did not discover Starbucks until March of 1995 in Houston and I became a Starbucks addict later that year.”

Since that time, Winter said he believes the company’s customer service and store design has greatly improved. Starbucks CEO Howard Schultz left the company in 2000 and returned in 2008 — transforming certain elements of the company for the future.

“In the mid ‘90s when I discovered Starbucks and through the mid 2000s, Starbucks store design was mostly cookie cutter. You’d have essentially the same layout, same design elements from store to store across the country. Then Howard Schultz stepped away as CEO,” Winter explained. “He came back in late 2008 after the purge, and he put out an open letter to the public admitting that Starbucks had made mistakes, had opened too many stores, had chosen poor locations, and that they were committed to choosing better locations moving forward, and having more individualized stores.”

Winter said more Starbucks stores are now unique to their own communities. The company has also added WiFi, electrical outlets and improved other areas of customer service throughout its locations.

At the same time, Winter feels the coffee quality has steadily declined since he started drinking Starbucks. Part of the reason could be that he has developed a taste for third wave, lighter roasted coffee, he said. He’ll often seek out coffeehouses offering artisanal or specialty coffee, which he also documents on his website.

But despite his coffee tastes, Winter is committed to his Starbucks project and constantly monitors the Starbucks website for store openings, closures and relocations. Many times, a store will move locations — sometimes across the street or within the same building unit — which has “significantly” increased his efforts to keep up.

“Starbucks put new store development on effective hiatus for several years from 2009 to 2012. When they started ramping up growth in North America again, a significant percentage of store openings were relocations of older stores. Now, over half a decade later, Starbucks has relocated more than 1,000 stores across North America.”

Winter uses a database to keep his Starbucks visits organized, he said.

“It would be impossible to do it otherwise,” Winter said. “And even with the database, it’s a nightmare because Starbucks has been routinely changing store names for decades on the website.”

After more than 15,000 stores and counting — Winter said his favorite location is the Dazaifu Tenmangu Sando store in Fukuoka, Japan.

After more than 15,000 stores and counting — Winter said his favorite location is the Dazaifu Tenmangu Sando store in Fukuoka, Japan.

"When asking me about Starbucking, most journalists focus on Starbucks, but that's like looking at a painting and fixating on the canvas," he wrote recently on Twitter. "In truth, Starbucking is more about challenges, travel, experiences and people than about one company."