NEW BRIGHTON, Minn. (FOX 9) - A Lino Lakes, Minnesota man is facing charges after he allegedly injured a New Brighton police officer by driving a stolen vehicle into a building while the officers’ arms were caught inside the driver’s side door and then fled the scene. 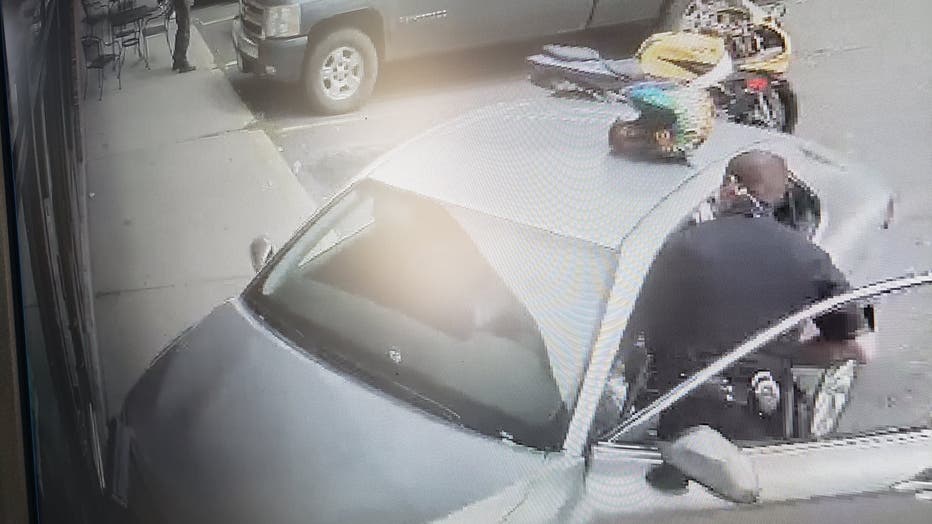 New Brighton police say an officer broke his wrist after he was assaulted by a suspect following a traffic stop Monday. (New Brighton Department of Public Safety / FOX 9)

According to the charges, at 2:10 p.m., Officer Joseph Pyka spotted a man and a woman on a motorcycle in the parking lot of a tobacco store on the 2400 block of County Road E in New Brighton that did not have a license plate on the back. He stopped the motorcycle and spoke with the driver, now identified as Paulsen, who said he was test driving the motorcycle.

Officer Pyka asked Paulsen for his driver’s license. Paulsen got off the motorcycle and walked over to the driver’s side of a Toyota Camry that was parked in the adjacent parking spot. He began looking around in the vehicle, but said he did not have any form of identification on him or in the car.

Paulsen refused to get out of the car and tried to close the driver’s side door. Pyka grabbed ahold of Paulsen’s arms and tried to remove him from the car, but Paulsen put it into drive and accelerated forward, striking the tobacco store and then a concrete pillar.

Pyka continued to try to pull Paulsen out of the vehicle, but he fled onto Silver Lake Road.

The officer suffered a broken wrist during the incident because his arms were still caught in the car when Paulsen tried to flee.

An assisting squad car saw the Camry leave the parking lot and began pursuing it, but Paulsen did not stop. Other squad cars joined the chase. At various points, they saw Paulsen dumping small plastic bags, one containing white powder, out the car window.

Officers successfully completed a PIT maneuver at the intersection of 37th Avenue and Hayes Street and incapacitated the Camry . Paulsen jumped out and began running behind houses, but officers pursued him on foot and eventually took him into custody.

According to the New Brighton Department of Public Safety, another officer sought medical evaluation for an injury they suffered during the foot pursuit.
Paulsen told the officers he had ingested heroin, so medics transported him to Regions Hospital for evaluation, the charges say.

Police located a 9 mm handgun laying next to the Camry. They also learned the Camry was a stolen vehicle out of Coon Rapids and the motorcycle had been reported stolen out of Burnsville that day.

Paulsen has two felony convictions, one for burglary and another for illegally possessing a firearm.