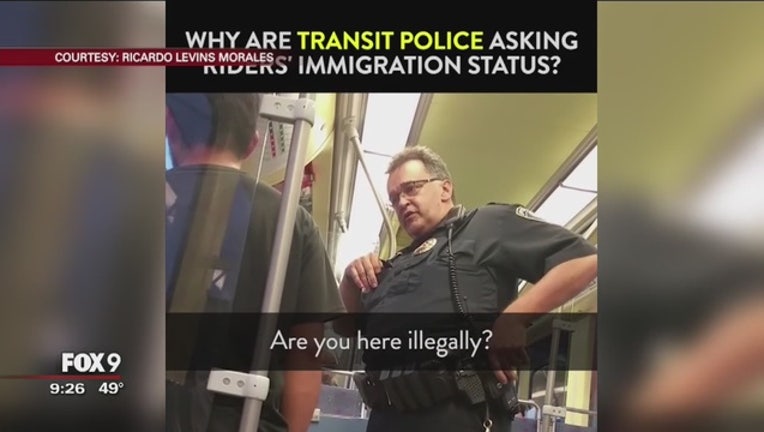 (KMSP) - A man questioned by a Metro Transit officer about his immigration status is expected to be deported.

In a statement released Saturday, Metro Transit Police Chief John Harrington confirmed the reports. Recently, a viral video showed the officer asking the man about his legal status. That officer no longer works for Metro Transit.

In the statement, Harrington wrote that the department policies and procedures "reflect our commitment that our officers will not act as immigration officers."

On May 23rd, Metro Transit first became aware that an officer questioned a rider about his immigration status. Immediately, our focus turned to ensuring that our officers fully understand and adhere to our policy regarding immigration status. The policy has been updated to explicitly state that Metro Transit officers will “ensure equal enforcement of the law and equal service to all persons regardless of their immigration status.” We also are working to reestablish the trust that was broken by this isolated incident.

As our internal investigation proceeded, we understood that Vences-Lopez had been released from the custody of the Hennepin County Sheriff’s Office. Believing that he was free and scheduled for a June Hennepin County court appearance, our goal was to explore options for him, such as the possibility of some diversion, rather than a court date.

We learned on the evening of Friday, May 25th that Vences-Lopez was in Immigration and Customs Enforcement custody and was scheduled for deportation. Vences-Lopez was first brought to the Hennepin County Adult Detention Center on Sunday, May 14 for fare evasion. There was no reference to his immigration status in the police reports, nor did MTPD notify ICE or any other agency of any immigration-related concerns.

As is standard procedure, he was placed in the custody of the Hennepin County Sheriff’s Office. We now know that on May 16th, three days before the video of the interaction was posted, he was placed in ICE custody.

We continue to reach out to community partners to notify them of updated information. We are also working to address the issues raised by community members. The officer seen in the video is no longer an employee of the Metro Transit Police Department. We have initiated a process for posting the Metro Transit Police Department’s manual online, making it publicly accessible.

Metro Transit officers come into contact with thousands of riders on a daily basis. We strongly value our relationship with all of the communities we serve and fully understand the importance of our riders’ need to feel confident that they can interact with our officers without fear. The image of a single officer’s questioning immigration status is not reflective of, nor does it represent, the practices and procedures of Metro Transit officer