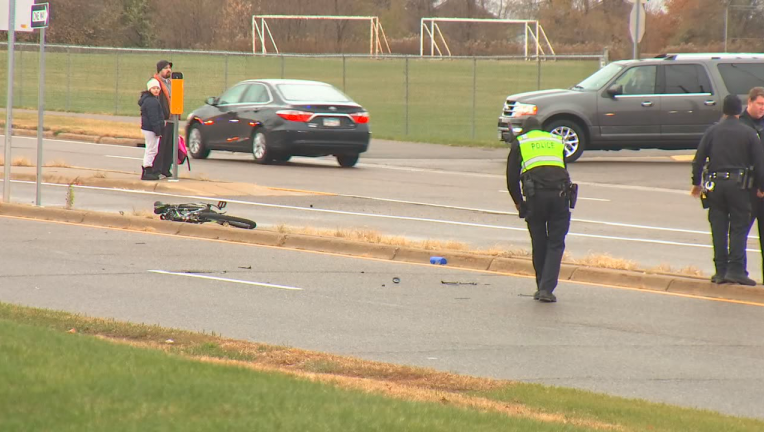 EAGAN, Minn. (FOX 9) - Dakota County officials are seeking approval to put a full School Zone with speed reductions in place along Diffley Road on a stretch where a 13-year-old boy died while riding his bicycle earlier this month.

According to a press release, officials from the City of Eagan, Dakota County and ISD 196 are hoping to get approval so the school zone is in place by the time students return from holiday break in January.

Dakota County officials are seeking approval&nbsp;to put a full school zone with speed reductions&nbsp;in place along Diffley Road on a stretch where a 13-year-old boy died while riding his bicycle earlier this month.

A white ghost bike now adorns Diffley Road near the memorial of flowers that appeared there exactly two weeks ago, the day 13-year-old Patric Vitek lost his life on his way to school.

“It breaks my heart,” said Stacy Angerhofer, a community member.

Angerhofer is thrilled to hear plans are on the fast track, but as one of the neighbors who has been begging the city for changes since last year, her feelings are understandably mixed.

“My heart is still broken for the family, and it certainly shouldn’t have taken a child losing his life to do something with how much the community has asked,” she said.

There will be an open house on December 11 to discuss possible safety improvements as well as long-term improvements. Dakota County Commissioner Tom Egan says plans for bigger improvements, such as roundabouts or maybe even a tunnel, will be presented at the meeting.

“It would be very expensive, but that’s one of the things we definitely will be looking into,” said Egan.

He says they are serious about moving quickly.

“At that meeting we’ll try and get as much input from residents as we possibly can, and we hope as a result of that, by March 1, we’ll have a plan in place that we can live with,” he said.