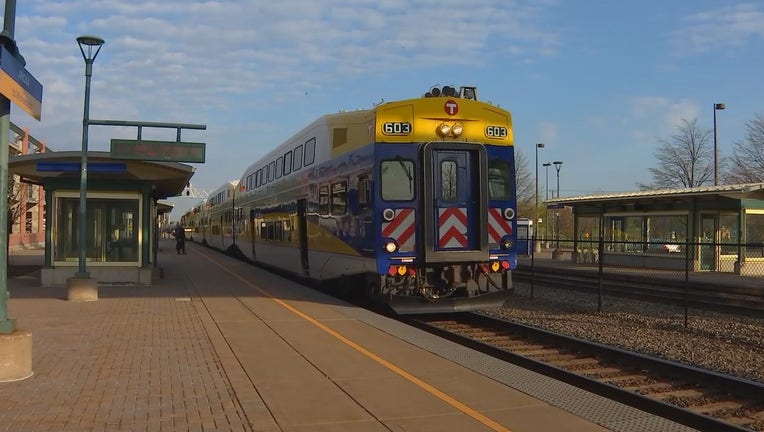 The Northstar train pulls up to the station. (FOX 9)

ST. PAUL, Minn. (FOX 9) - Minnesota lawmakers are debating whether to deactivate the Northstar Line commuter rail or heavily subsidize it in the hopes that its customer base rebounds after the COVID-19 pandemic.

Ridership on the Minneapolis to Big Lake line has plunged 96 percent during the pandemic as downtown office towers emptied, workers set up home offices, and sporting events were played with few or no fans in attendance. In 2019, the line averaged more than 60,000 riders per month. Over the past year, Northstar has averaged about 2,000 monthly riders.

Minnesota lawmakers are debating whether to mothball the Northstar Line commuter rail or heavily subsidize it in the hopes that its customer base rebounds after the COVID-19 pandemic.

"We think making this long-term decision and shutting down the service completely is not a good idea at this time," Zelle told lawmakers on the Transportation conference committee. "We do see traffic coming back to downtown. We’re not sure what the patterns are."

Zelle revealed that he considered shutting down Northstar temporarily last year. He ultimately decided against it, he said, when the Federal Transit Administration would not allow service to be suspended for more than 12 months.

Met Council's cost analysis found the agency would only save $1.4 million from a short-term shutdown because of ongoing contracts and restart costs, said Bonnie Kollodge, a spokesman for the agency.

Met Council, the seven-county agency that oversees Metro Transit, estimates that taxpayers are subsidizing each one-way ride by $68.35, a figure that jumps to $87.79 without federal aid in the 2020 CARES Act. For comparison, a one-way ticket from Big Lake to Minneapolis costs $6.25.

Republicans who control the state Senate said the taxpayer subsidy is far too high.

Newman said he wanted to seek federal permission to mothball the rail line because of the potential federal penalty involved. Zelle and Anderson Kelliher said the federal government could hold Minnesota liable for $150 million in funding used to build Northstar.

With the rail line's future in limbo, Metro Transit has pulled back significantly on Northstar's operations. Trains make just 20 trips a week now, down from 72 before the pandemic. Northstar operates two southbound trains to Target Field Station in the morning and two northbound trains to Big Lake in the evening.

The trains that do operate are hardly full. FOX 9 saw only a handful of riders get on or off the train during multiple visits to the Anoka and Coon Rapids stations this week.

But those who do ride are big supporters, noting that Northstar saves them money on gas and parking in downtown Minneapolis.

"I don't want them to stop the train because I really enjoy riding it," said Ellen Peterson, who works at Hennepin Healthcare and said she had been riding Northstar since its 2009 debut. "We'd probably have to pool together, some of us who come downtown, and ride together. I just can't see driving every day."

Others said they took the train to avoid traffic congestion and construction on Interstate 94.

"I actually drove yesterday. It took me an hour and 10 minutes to get home," said Kevin Sweet of Big Lake as he caught the train downtown.

Northstar was controversial long before the pandemic. It has frequently been the target of Republican criticism for its high operating subsidy. St. Cloud-area lawmakers have lobbied for a long-planned but never-built extension to St. Cloud, which has a larger pool of potential riders than Big Lake.

The issue is one of several policy differences between the House and Senate transportation budgets that must be resolved soon. The Legislature adjourns May 17.