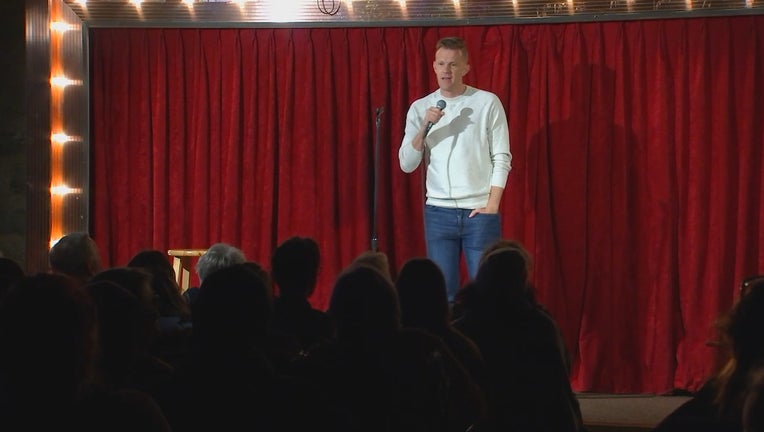 MINNEAPOLIS (FOX 9) - Sobriety and a sense of humor were the starring act Tuesday at a Minneapolis comedy club.

The unique event at Acme Comedy gave people a place to go out and have fun without the alcohol.

Laughter without liquor: Sober comedy show in Minneapolis gives back to community

Sobriety and a sense of humor were the starring act Tuesday at a Minneapolis comedy club.

Tuesday also marked the fourth anniversary of the organizer's sobriety, so it’s fitting that there's a comedy show where drinking is no joke

Patrick Strait said it was hard to find things to do without drinking when he came out of treatment for alcoholism four years ago. So, he organized a sober comedy show called Recovery Riot where only non-alcoholic drinks are served, there are no jokes glorifying alcohol or drugs, and all the proceeds go to Stepping Stones sober house in St. Paul.

“It’s an opportunity for people who are sober or new to recovery, or just don't drink a lot, to have a night out and see there are still fun things you can do in recovery and do sober."

Mike Early is one four local comedians to take the stage. He said even though his sobriety isn't a big part of his act, he enjoys being part of a show where his sense of humor isn't the only thing that's dry.

"I take most gigs I'm offered, so this was a gig I was offered, and I've been sober for a while, so it all adds up," Early said. “I still have to maintain it. It’s my life now, the only one I know. I do a joke, ‘I couldn't start drinking now if I tried because they don't sell stolen vodka with Kool-Aid packets in bars.’"

Strait believes there's a growing audience for sober events like this, and it if it helps even one person not drink for another day, he'll be the one who gets the last laugh.

"One of the things I've learned is that going to comedy clubs and doing events like this is a great way for me to stay sober. So, it’s my opportunity to pass that knowledge on to other people so they can find opportunity to find what they enjoy doing just as much.”