A crowd protesting the North Dakota Access and Keystone XL pipelines gathered in Pershing Square in Los Angeles, California, on Sunday, February 5, to fight President Donald Trump’s plans to move forward with the construction of the pipelines.

Biden’s Day One plans included moving to revoke a presidential permit for the pipeline.

The premier of the oil-rich Canadian province of Alberta called it an "insult" and said the federal Canadian government should impose trade sanctions if it is not reversed.

The 1,700-mile (2,735-kilometer) pipeline was planned to carry roughly 800,000 barrels of oil a day from Alberta to the Texas Gulf Coast, passing through Montana, South Dakota, Nebraska, Kansas and Oklahoma.

"Advancement of the project will be suspended," the Calgary, Alberta-based company said in a statement.

Keystone XL President Richard Prior said over 1,000 jobs, the majority unionized, will be eliminated in the coming weeks.

"We will begin a safe and orderly shut-down of construction," he said.

Signs attached to a fence on the property of Jim Tarnick, a farmer opposed to the controversial Keystone XL pipeline, are pictured April 17, 2013 in Fullerton, Nebraska.

First proposed in 2008, the pipeline has become emblematic of the tensions between economic development and curbing the fossil fuel emissions that are causing climate change. The Obama administration rejected it, but President Donald Trump revived it and has been a strong supporter. Construction already started.

"We are disappointed but acknowledge the President’s decision to fulfill his election campaign promise on Keystone XL," Canadian Prime Minister Justin Trudeau said in a statement.

White House press secretary Jen Psaki said Biden will call Trudeau on Friday, the first call with a foreign leader after Biden took the oath of office. Psaki said the pipeline will be discussed.

Trudeau raised Keystone XL as a top priority when he spoke with Biden in a phone call in November. The project is meant to expand critical oil exports for Canada, which has the third-largest oil reserves in the world. 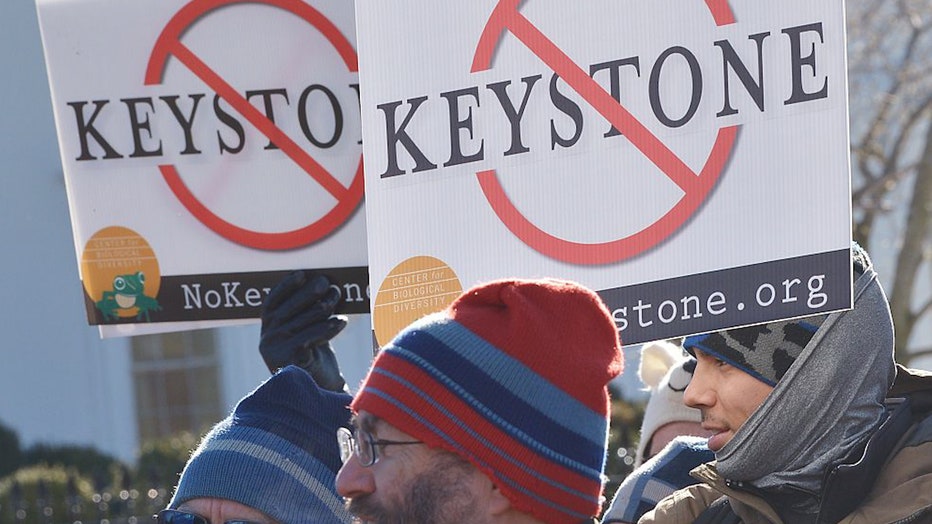 Demonstators take part in a protest outside of the White House against the building of the proposed Keystone XL oil pipeline on January 10, 2015 in Washington, DC.

"It is a insult directed at the United States most important ally and trading partner on day one of a new administration," Kenney said.

"The leader of our closest ally retroactively vetoed approval for a pipeline that exists and which is co-owned by Canadian government, directly attacking by far the largest part of the Canada U.S. trade relationship, which is our energy industry and exports."

Canada is America's number one source of foreign oil.

Trudeau and Biden are politically aligned and there are expectations for a return to normal relations after four years of Trump, but the pipeline is an early irritant as Biden has long said he would cancel it.

"Despite President Biden’s decision on the project, we would like to welcome other executive orders made today, including the decisions to rejoin the Paris Agreement and the World Health Organization, to place a temporary moratorium on all oil and natural gas leasing activities in the Arctic National Wildlife Refuge, and to reverse the travel ban on several Muslim-majority countries," Trudeau said.

But Marty Durbin, president of the U.S. Chamber of Commerce's Global Energy Institute, said Biden's decision is not grounded in science and will put thousands of Americans out of work,

"The pipeline — the most studied infrastructure project in American history — is already under construction and has cleared countless legal and environmental hurdles," Durbin said in a statement. "Halting construction will also impede the safe and efficient transport of oil, and unfairly single out production from one of our closest and most important allies."

"Killing the Keystone XL pipeline once and for all is a clear indication that climate action is a priority for the White House," said Dale Marshall, national climate program manager for Canada’s Environmental Defence.