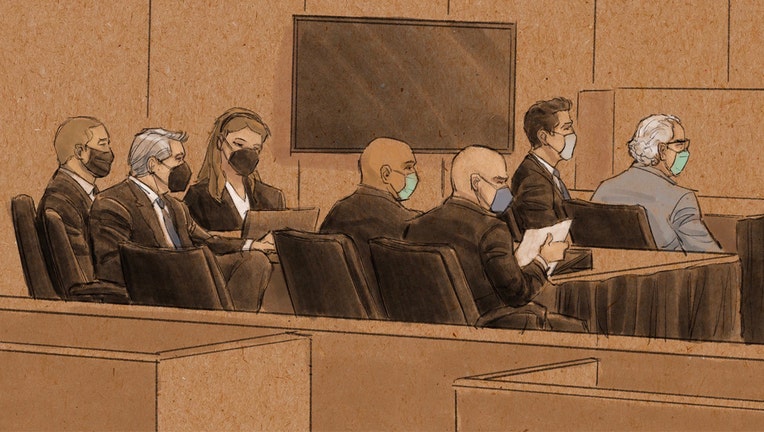 ST. PAUL, Minn. (FOX 9) - Just before 10 a.m. Wednesday morning, a jury of 8 women and 4 men, all of them white, began deliberations in the federal case against 3 former Minneapolis Police officers accused of depriving George Floyd of his constitutional rights.

The jurors come from nine Minnesota counties: two each from Hennepin, Ramsey and Olmsted. One each from Anoka, Washington, Scott, Nicollet, Blue Earth and Jackson.

Just before 10 a.m. Wednesday morning, a jury of 8 women and 4 men, all of them white, began deliberations in the federal case against 3 former Minneapolis Police officers accused of depriving George Floyd of his constitutional rights.

Tou Thao, J. Alexander Kueng and Thomas Lane are all charged with failing to give medical aid to George Floyd as he slowly suffocated to death under the knee of Derek Chauvin, who was convicted of Floyd’s murder last year.

Thao and Kueng are also charged with failing to intervene in Chauvin’s use of force. Lane, who twice asked about rolling Floyd on his side and who was least able to see exactly where Chauvin had his knee, is not charged with that count.

The trial began with opening statements on January 24th. Four weeks and more than 30 witnesses later, including all three defendants, the jury got the case.

A key element to the charges is the idea of "willfulness." The jurors have to agree that the three defendants intentionally decided not to intervene or not to provide help.

The prosecution argued the defendants had to know that George Floyd urgently needed help. They repeatedly highlighted the pleas from bystanders that Chauvin’s knee was suffocating Floyd, pleas that turned into demands that the former officers check Floyd’s pulse after he went unconscious. They told jurors in closing arguments that if the crowd on the sidewalk knew Floyd was dying, then the trained officers must have known, too, but choose to do nothing.

Defense attorneys, using the former officers own testimony, tried to convince the jury that the former officers did not perceive the problems: that they were trained with knees on necks, so that hold wouldn’t alarm them, particularly for Kueng, who said he couldn’t see that Chauvin’s knee was directly on Floyd’s neck.

And they argued that the officers all suspected Floyd of being in an "excited delirium" state, and the training is to hold people down until EMS arrives because of the unpredictable behavior.

The defense argued the former officers did not know that Floyd had stopped breathing, and when they could not find a pulse, they didn’t consider their ankle and wrist checks to be reliable, and seconds later, saw the ambulance less than two blocks away.

In giving the jury their instructions Wednesday morning, Judge Paul Magnuson explained to them the legal elements of the charges, to use the evidence and testimony to decide if the defendants acted "willfully and with a bad purpose."  He instructed them they can decide what testimony to believe, that "you may believe all of what a witness says, part of it, or none of it."  He told them it is their duty to find the facts, apply the law and "don’t allow sympathy or prejudice to influence you."