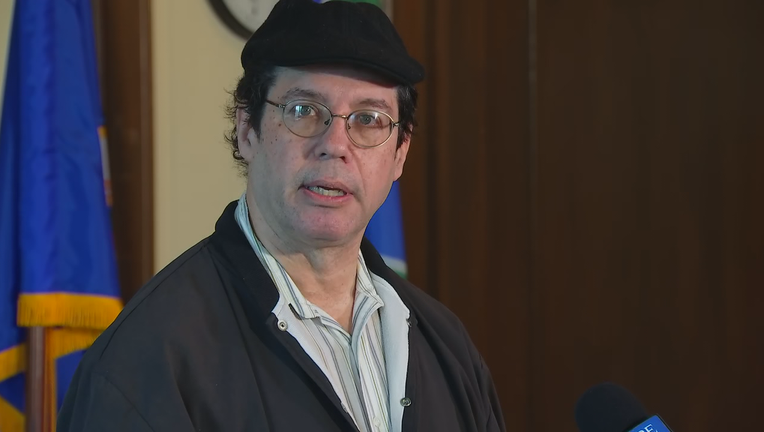 DULUTH, Minn. (FOX 9) - As officials updated media on the fire at the Adas Israel Congregation Synagogue in Duluth, Minnesota, representatives from the local Jewish community thanked the department for its work in the investigation.

"I'd very much like to express my gratitude to the Duluth police and fire departments," said Rabbi Phillip Sher. "Their efforts were heroic. I stood there and watched as they went into a building that I later found out was still burning to go and try to save some of our artifacts, some of our Torahs and antiquities. The bravery of these men is just incredible, and I can't thank them enough."

Officials said they have a 36-year-old Duluth man in custody in connection to the fire that destroyed a synagogue last week in Duluth, Minnesota.

The rabbi said the fire department stabilized the synagogue, but it is still marked off as the investigation continues. A 36-year-old Duluth man remains in custody pending arson charges.

"I would like to, on behalf of all of our congregants, thank everybody. The outpouring of goodwill has been tremendous," Rabbi Sher said.

The rabbi said that several fundraisers have been started on the congregation's behalf.

"We have not sanctioned any of them, and at this time, we are asking people to please withhold giving us funds. We don't know how we are financially as of this time, but we'll be working with the insurance company," he said. "The last thing we want to do is use people's hard-earned money when we may in fact not need it."

Statement from the Steve Hunegs, executive director of the Jewish Community Relations Council of Minnesota and the Dakotas:

“The Jewish Community Relations Council of Minnesota and the Dakotas (JCRC) thanks the Duluth Police Department, Duluth Fire Department, and Bureau of Alcohol, Tobacco, Firearms, and Explosives for their thorough, professional, and ongoing investigation.

“At today’s press conference in Duluth, I had the opportunity to personally thank law enforcement, city officials, and other first responders for their efforts to subdue the fire, rescue holy artifacts, and safeguard the Jewish community. I also conveyed the Twin Cities Jewish community’s unwavering support for our friends in the Twin Ports.

“While Duluth Police Chief Mike Tusken stated that the current charge of first-degree arson is not being elevated as a bias-motivated or hate crime, the destruction of Adas Israel Congregation remains a tragedy for generations of Jewish Duluthians. Over the past week, we have read moving testimony of family memories that date back a century or more.

“We understand that our Jewish community feels uneasy in this current political and social environment where synagogues, mosques, and predominately black churches have been attacked in recent years. The image of a house of worship ablaze is a searing reminder of the challenges we face with rising antisemitism and bigotry in this country. We ask the public to respect the investigative process and withhold final judgment until the full facts are revealed in the criminal complaint later this week.

“While we are fortunate that there were no fatalities, we note that a courageous Duluth firefighter sustained a concussion injury while combatting the blaze. We also reiterate our thanks to Duluth’s Temple Israel and Chabad synagogues for opening their arms to welcome Adas Israel members who are grieving the loss of their spiritual home.”

Officials give updates after a synagogue was destroyed in an arson fire Monday in Duluth, Minn. A 36-year-old man is in custody.