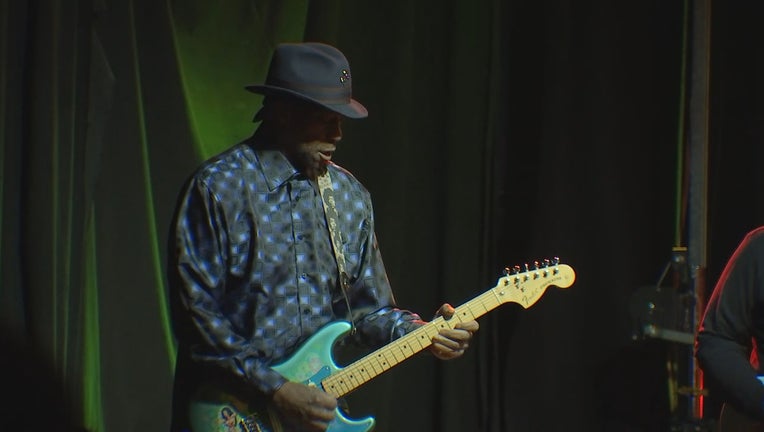 Jellybean Johnson performs at the Minnesota Music Cafe in St. Paul amid the pandemic. (FOX 9)

MINNEAPOLIS (FOX 9) - When people talk about the Minnesota music scene, they usually mention the "Minneapolis Sound."

Most people will tell you it started with Prince, but there were others around that same time who helped put that iconic sound on the map.

Jellybean Johnson helped put the Minneapolis Sound on the map. Now decades later, his music continues to influence some of the biggest artists.

One of them is Jellybean Johnson.

You might think playing a nearly empty club during a pandemic would be disheartening, but Jellybean lives for nights like this.

"You know music is my whole being. If I couldn't do music I probably wouldn't exist," said Jellybean.

Top hat and towering stature aside, Jellybean Johnson is one of the most unassuming music legends in Minnesota history and a pioneer of the Minneapolis Sound.

"I've heard him play some blues and you just want to walk up to someone and slap them and hug them at the same time," said Walter 'Q Bear' Banks, a DJ at KMOJ. "That's how good he is, he really is. That's JB Johnson."

Few people know the Minneapolis Sound music better than Q Bear. He's been playing it at KMOJ radio for 43 years.

"Prince is probably the most notable person globally out of everybody and everything," said Q Bear. "But talent-wise this cat was just amazing. It's just crazy how much talent he had and you know all the different instruments he could play."

Garry 'Jellybean' Johnson grew up in Chicago. At 13, his mom moved the family to north Minneapolis for a better life. To keep Garry out of trouble, she bought him his first real drum kit. He learned to play by listening to the radio.

"When I moved here, Black radio was only on for four hours from 1 to 5 in the afternoon," said Jellybean. "That forced me to listen to a lot of white rock stations and that's how I got into Three Dog Night and Black Sabbath and Red Earth and all those kinds of people and stuff and that changed me too musically."

As a teenager, he found friends in the neighborhood with a similar passion for music. We now know them as Jimmy Jam, Terry Lewis, Morris Day and Prince.

"We would have this huge festival in the summertime and all the rival bands and neighboring bands would come and play in front of thousands of people out in North Commons Park over here, so we cut our teeth doing that as youngsters," said Jellybean.

Once Prince signed his first record deal at 18, he brought some of his northside friends along. Prince created 'The Time', made Jellybean the drummer and put them on the map in Purple Rain.

"Prince told Morris, 'You go back and get Jellybean and we'll do the band and you're gonna sing,'" said Jellybean. "And Morris was like, 'I don't want to sing, I want to play the drums.' And he was like, 'No, I'll teach you.'"

It was the '80s and the Minneapolis Sound was reinventing pop music. Behind the scenes Prince's bands, including The Time, were falling apart. Eventually Jellybean turned to producing. He went to work for Flyte Time records and his old friends Jimmy Jam and Terry Lewis, who at the time were working with Janet Jackson.

"We were doing 'Rhythm Nation' and we got to the end of 'Rhythm Nation' and Janet came with this song. It was this little bar phrase on a cassette you know. But it was on a piano, you know," said Jellybean. "So Janet brought that to me and I was like, wow you know, and I told her I said you know your brother has 'Beat It' and 'Dirty Diana' and all that stuff I said it'd be really cool if you had like a hard rock anthem."

So Jellybean turned the piano into an electric guitar and that little bar phrase became the number one hit, 'Black Cat'.

"I told Janet I said I want you to sound like a rock and roll queen on that," he said. "Now I wasn't sure that she knew what the hell I was talking about. It turned out she did. We kicked everybody out of Flyte Time, her boyfriend, everybody. Kicked everybody out, just me and her and which is good in a way because to get that kind of sound you gotta be really, really loud."

Even now, some 40 years later, you can still hear Jellybean and that Minneapolis Sound influencing some of music's biggest artists.

"If you listen at Bruno Mars you hear that he did his homework on us, you know," said Jellybean. "And he'll tell you that. We played the Grammys with him one year and he said that he learned a lot of stuff from us."

"The greasiness the funkiness the stank the grit all of that that's in it is exactly what that Minneapolis Sound is," said Q Bear.

Jellybean's not done yet. At 64-years old, he just released a new album called "Get Experienced. The Jellybean Johnson Experience."

"I have all these different layers to my musical journey, so that's what I try to do on this record is put all of them in there," said Jellybean. "Even though everybody knows I'm funky, everybody knows about the hard rock guitar stuff, so we got all that in there. I just got a fabulous group of musicians in there and they were willing to give me their time to do this."

Back on stage at the Minnesota Music Cafe, Jellybean Johnson is in his element. It doesn't matter if it's for one or 100,000. He's here for the music - what it does for the soul. An unassuming music icon, writing the next chapter of his legendary career.