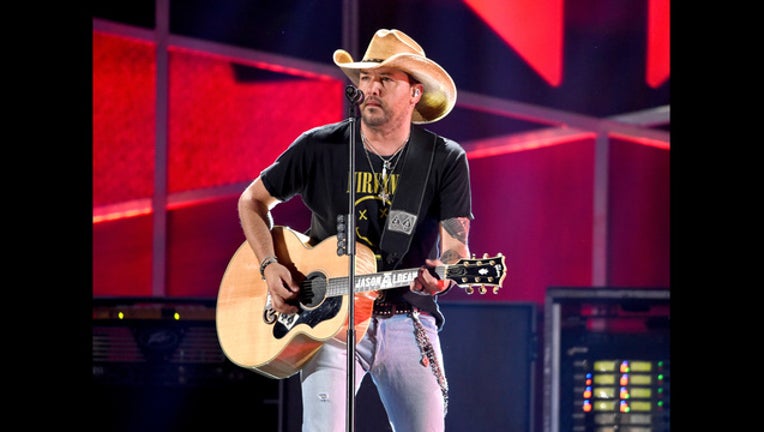 AUSTIN, TX - MAY 06: Singer Jason Aldean performs onstage during the 2017 iHeartCountry Festival, A Music Experience by AT&T at The Frank Erwin Center on May 6, 2017 in Austin, Texas. (Photo by Cooper Neill/Getty Images for iHeartMedia )

Country music star Jason Aldean is speaking out after the devastating mass shooting that took place while he was performing in Las Vegas Sunday night. The Georgia native had been on stage for just a few minutes when the gunfire began.

"Over the last 24 hrs I have gone through lots of emotions. Scared, Anger, Heartache, Compassion and many others. I truely dont understand why a person would want to take the life of another. Something has changed in this country and in this world lately that is scary to see. This world is becoming the kind of place i am afraid to raise my children in. At the end of the day we arent Democrats or Republicans, Whites or Blacks, Men or Women. We are all humans and we are all Americans and its time to start acting like it and stand together as ONE! That is the only way we will ever get this Country to be better than it has ever been, but we have a long way to go and we have to start now. My heart aches for the Victims and their families of this Senseless act. I am so sorry for the hurt and pain everyone is feeling right now and there are no words i can say to to take that pain away. Just know u all are in my heart and my prayers as we all go through this together. Time to come together and stop the hate! #stopthehate #prayforlasvegas"

In his hometown of Macon, Aldean's neighbors are grieving alongside him. Many said they are simply devastated by the news and all they can do is pray.

The shooting took place as 22,000 people gathered at an outdoor country music festival along the strip.

At the concert, Aldean had just started his set shortly after 10 p.m. to close out the three-day Route 91 Harvest Festival when bullets started hitting people. In the crowd there was gunfire, but no gunman. Some figured out where it was coming from through the cracks and muzzle flashes.

The gunman, 64-year-old retired accountant Stephen Paddock, appeared to fire unhindered for more than 10 minutes, according to radio traffic, as police frantically tried to locate him.

The crowd, funneled tightly into a wide-open space, had little cover and no easy way to escape. Victims fell to the ground, while others fled in panic. Some hid behind concession stands or crawled under parked cars.

Faces were etched with shock and confusion, and people wept and wailed. Some of the injured were hit by shrapnel. Others were trampled or were injured jumping fences.

The attack became the deadliest mass shooting in modern U.S. history with 59 killed and 527 wounded.

Paddock killed himself as authorities stormed his hotel room.