MINNEAPOLIS (FOX 9) - Not long after the unrest that followed the death of George Floyd, the owner of one burned down restaurant was recognized for his support for the protests. The owner of Gandhi Mahal said they’re working to recover, but it’s taking some time.

For Ruhel Islam, the spot at 27th Avenue South and Lake Street has always signified a labor of love.

Not long after the unrest that followed the death of George Floyd, the owner of one burned down restaurant was recognized for his support for the&nbsp;protests.&nbsp;The owner of Gandhi Mahal said they’re working to recover, but it’s taking some time.

"We kind of came to the new world and built the community, the whole thing – a lot of effort, a lot of work, a lot of memories there," Islam said.

And while it sits empty now, there is a story of what it was and what it will be.

Islam came to the U.S. from Bangladesh in the '90s and opened his restaurant, Gandhi Mahal, in 2008. Then, one year ago, he saw it burn down in the riots following George Floyd’s death.

"We escaped from this trouble back home, and I was not ready to see this same kind of what looked like a war going on… I wasn’t expecting to see this here," he said. "I commented, 'Let my building burn, justice needs to be served because whatever happened was because injustice happened.'"

The restaurant owner said food is the great connector, so he set up shop temporarily on East Franklin Avenue last fall - a takeout restaurant called Curry in a Hurry. 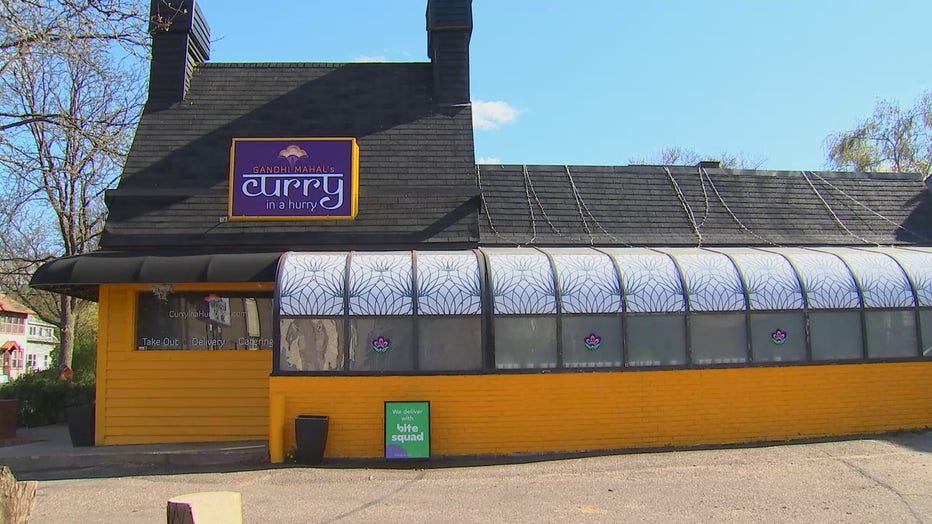 Curry in a Hurry can be found on East Franklin Avenue.

"We’ll be selling curry bowls the next three or four years here, and in the meantime at our old location - finally, after one year - they cleaned up and now we fenced around and are building a community garden," he said.

Islam said now they’re looking at three different options for the new Gandhi Mahal. It will be a combined effort with a local theater and a bar/restaurant/nightclub concept.

"For me, it’s all about community… we are very deeply connected," he said.

Until the new buildings go up in the coming years, Islam will continue to plant the seeds of something greater – which will always involve good food.

"We need to figure out a way how we come together over a meal. I’m here, anywhere to come I’ll bring food and we’ll eat together," he said.