MINNEAPOLIS (FOX 9) - Several Minneapolis businesses--including many of those that were damaged during the riots--have voiced solidarity with protesters, lamenting the death of George Floyd.

One of the most notable reactions came from the restaurant Gandhi Mahal, located near MPD's third precinct. In a Facebook post Friday, owners wrote, "Sadly Gandhi Mahal has caught fire and has been damaged. We won’t [lose] hope though, I am so greatful for our  neighbors who did their best to stand guard and protect Gandhi Mahal, Youre efforts won’t go unrecognized. Don’t worry about us, we will rebuild and we will recover. This is Hafsa, Ruhel’s daughter writing, as I am sitting next to my dad watching the news, I hear him say on the phone; 'let my building burn, Justice needs to be served, put those officers in jail.' Gandhi Mahal may have felt the flames last night, but our firey drive to help protect and stand with our community will never die!"

Earlier in the week, other businesses including Glam Doll Donuts - located on Eat Street, where some damage was reported - wrote that they would be closed Friday to mourn Floyd's death.

Birchwood Cafe, located in the Seward neighborhood, wrote on Friday that they would "not be opening today for coffee + pastry service or for lunch as we assess the state of our city. Hug those you can, take good care and please stay tuned for updates. Our path to justice will not be easy, just know that as we can, we will be here to nourish, strengthen, comfort and connect us all with Good Real Food. We ❤️ you Minneapolis."

The Turf Club, located in St. Paul's Midway neighborhood - another area that reported destruction - also wrote a response to the damage they endured, which included flooding and looting. 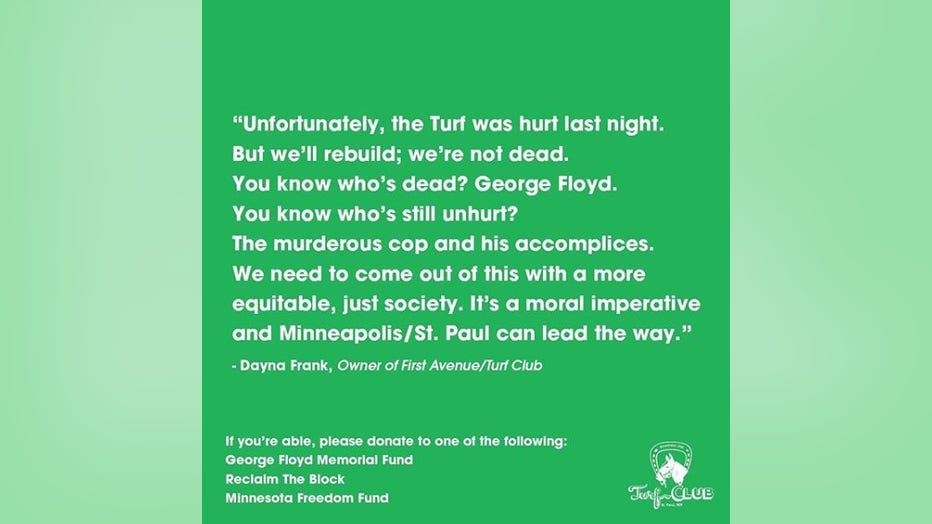 "Unfortunately, the Turf was hurt last night. But we'll rebuild; we're not dead. You know who's dead? George Floyd. You know who's still unhurt? The murderous cop and his accomplices. We need to come out of this with a more equitable, just society. It's a moral imperative, and Minneapolis/St. Paul can lead the way," wrote Danya Frank, owner of First Avenue/Turf Club.

By noon Friday, former officer Derek Chauvin had been taken into custody and charged with murder and manslaughter.