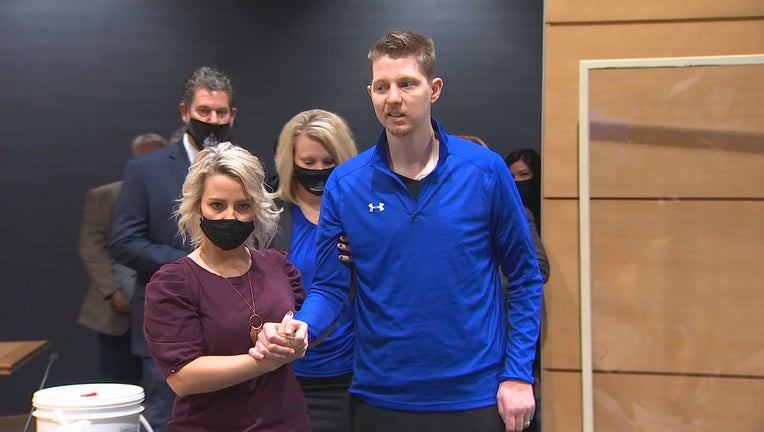 Waseca Police Officer Arik Matson, who nearly died after being shot in 2020, is calling on lawmakers to lengthen prison sentences for anyone who tries to kill a cop. (FOX 9)

ST. PAUL, Minn. (FOX 9) - Arik Matson, the Waseca police officer who was nearly killed in the line of duty in 2020, is asking Minnesota lawmakers to lengthen prison sentences for anyone who tries to kill a cop.

Lawmakers introduced bills in the House and Senate on Thursday that would mandate at least 30 years in prison for people convicted of attempted first-degree murder of a police officer, judge, prosecutor or correctional officer.

Tyler Janovsky was sentenced in November to 35 years, the maximum penalty, for shooting Matson in the head. Janovsky could've been eligible for release after just 14 years if he had not also been convicted of shooting at other officers.

"I wish I could say this will be the last time we have to prosecute this crime, but unfortunately, that’s probably not going to be the case," Matson said at the state Capitol on Thursday, with his wife Megan at his side. "But thank you for acknowledging how our jobs as police officers are never normal."

Minnesota law includes a maximum 20-year sentence for attempted first-degree murder of a police officer, though offenders are eligible for early release after two-thirds of the sentence, or 14 years.

"The current law does not account for if the officer or officers are gravely injured, almost die, have to learn how to eat, walk and talk all over again, and possibly not ever return to work," Cornelius said Thursday.

Hours before lawmakers introduced the legislation, a person and Minneapolis police officers shot at each other after a low-speed car chase. No officers were hurt; a police spokesman said the suspect's injuries were not life-threatening.

Circumstances of the incident were not immediately known.

State Rep. John Petersburg, R-Waseca, is the House sponsor of the bill.

State Sens. John Jasinski, Gene Dornink, Jeremy Miller, John Hoffman and David Tomassoni are the Senate authors. Jasinski, Dornink and Miller are Republicans. Hoffman is a Democrat, while Tomassoni is an independent.

"Any attempt on an officer’s life must be met with punishment that matches the heinousness of the crime," said Jasinski, R-Faribault. "We are going to make sure officers and their families get justice."

No committee hearings have been scheduled yet in either chamber.

Megan Matson said a change in state law would offer more justice to law enforcement families in the future.

"Passing this bill would mean a lot to us," she said. "There will never be enough justice, but this is a start."