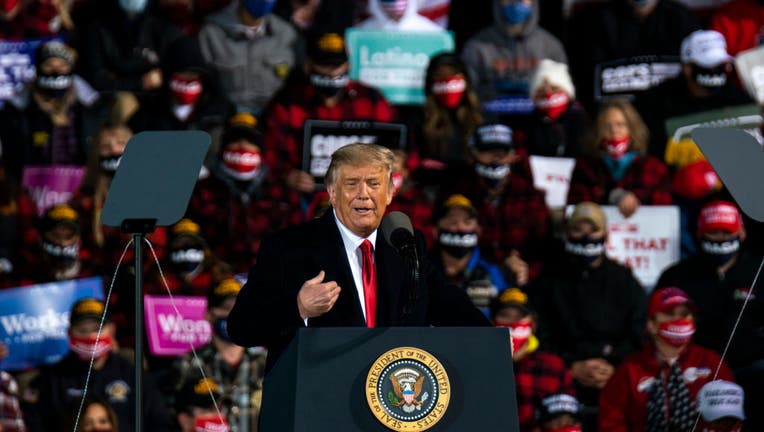 The lack of campaign events is in contrast to previous weeks: Trump, Vice President Mike Pence, and the president's children made nine stops to Minnesota over seven recent weeks, as the campaign looked to put Minnesota in play. But recent polls suggest that Democrat Joe Biden still holds the lead here.

President Donald Trump's campaign did not send any major players to Minnesota this week, the first time that's happened since before Labor Day.

The Trump campaign has also been slashing millions of dollars out of its original $14 million planned TV ad buys here, as FOX 9 first reported this week.

"What it’s suggesting at this point is they don’t believe they can be competitive here," said David Schultz, a Hamline University professor.

A Trump campaign spokeswoman did not directly answer questions about the apparent shift in the campaign's Minnesota strategy.

Republicans said campaign surrogates, including South Dakota Gov. Kristi Noem, would appear in Minnesota on the president's behalf in coming days. But no visits for Trump or Pence are scheduled.

Trump's most recent campaign rally was Sept. 30 in Duluth before being forced from the campaign trail -- and hospitalized for three days -- with a coronavirus infection. It's unclear whether the president was already infected when he arrived in Duluth; Trump's doctors have refused to say when he received his last negative test.

The president plans to return to the campaign trail on Monday in Florida, his campaign said. In the president's absence, Pence and members of the Trump family have been holding in-person events -- just not in Minnesota.

Meanwhile, Biden and running mate Kamala Harris have largely stayed away from Minnesota. Only Biden has made a visit, held Sept. 18 in Duluth.

Both campaigns have a Minnesota-specific calculation to make about future travel here: 635,003 Minnesotans have already voted, 21 percent of the state's overall turnout in 2016.

That means a shrinking pool of voters to persuade with in-person visits and TV ads.

The 25 days between now and Election Day prove there is still time for the president's campaign, Schultz said.

"At about three weeks out four years ago, four weeks out, most of the country was pretty convinced that Hillary Clinton was going to win the presidency," he said.