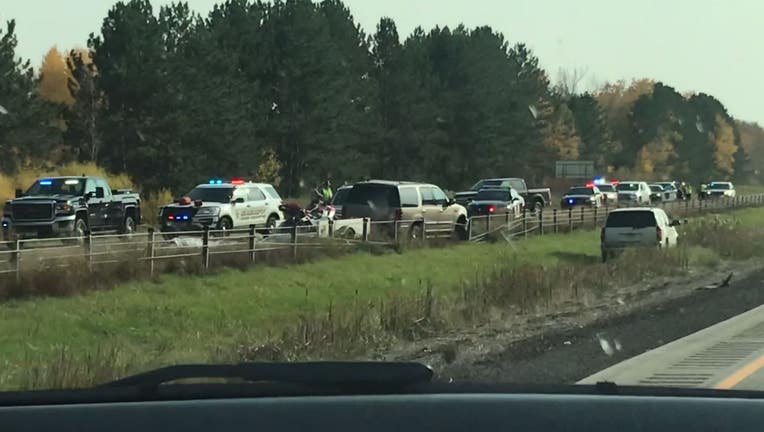 The Minnesota BCA is investigating a deadly police shooting that happened on I-35 in Pine County on Oct. 9, 2020. (Gayle Bergevin)

PINE COUNTY, Minn. (FOX 9) - A deadly police shooting on I-35 south of Hinckley is under investigation, according to the Minnesota Bureau of Criminal Apprehension.

Around 1:45 p.m. Pine County sheriff's deputies responded to a reported domestic incident at Grand Casino Hinckley. While they were headed to the casino, the deputies spotted the suspect's vehicle and started to chase after it.

The suspect went onto I-35 driving the wrong way. The driver was headed south in the northbound lane, but then stopped. Following an encounter, a deputy fired their gun, hitting the suspect. The suspect's vehicle rolled forward, crashed into an oncoming vehicle and then stopped in the median.

The suspect was pronounced dead at the scene. The driver of the other vehicle in the crash was not seriously injured. No officers were injured. The victim in the original reported domestic incident also was not harmed.

The Midwest Medical Examiner's Office will complete an autopsy and make an identification.

The BCA will review footage from body cameras and squad cameras. Once the BCA's investigation is completed, the Pine County Attorney's Office will review the findings to make a charging decision.

For several hours, I-35 was closed between Pine County Road 14 and Exit 180 due to the investigation, but the highway has reopened.