In the height of all the looting in downtown Minneapolis Wednesday night, one restaurant owner had an enormous decision to make.

MINNEAPOLIS (FOX 9) - In the height of all the looting in downtown Minneapolis Wednesday night, one restaurant owner had an enormous decision to make. Watching his business being destroyed, he pulled out his gun during an intense confrontation, before ultimately deciding not to pull the trigger.

The Nguyen family started the Lotus Restaurant in 1984. It’s the American dream, which was almost shattered in one night by a few people looking to destroy their hard work.

“To break into small businesses like this, you’re not getting anything,” said Yoom Nguyen, owner of the Lotus Restaurant. “I mean what are they going to get, egg rolls? They didn’t do that – they didn’t even go into the kitchen.”

Looters spread through the downtown after Minneapolis police say a homicide suspect died by suicide. Rumors spread that the man had been shot by police, which caused crowds to grow downtown. While police attempted to quell the rumors by releasing video of the incident, violence broke out.

Nguyen was at the restaurant when he says the crowd grew from ten to about 80 in minutes.

They didn’t listen - first throwing a rock, then a fire extinguisher. Five of them jumped inside. Then one guy zeroed in on Nguyen’s family photo and threw something at it. That action triggered Nguyen to pull out his gun. He has a license to carry. He did not fire.

He says he thinks the person who challenged him may have been a teenager, aged around 17.  For Nguyen it was a very rough night. 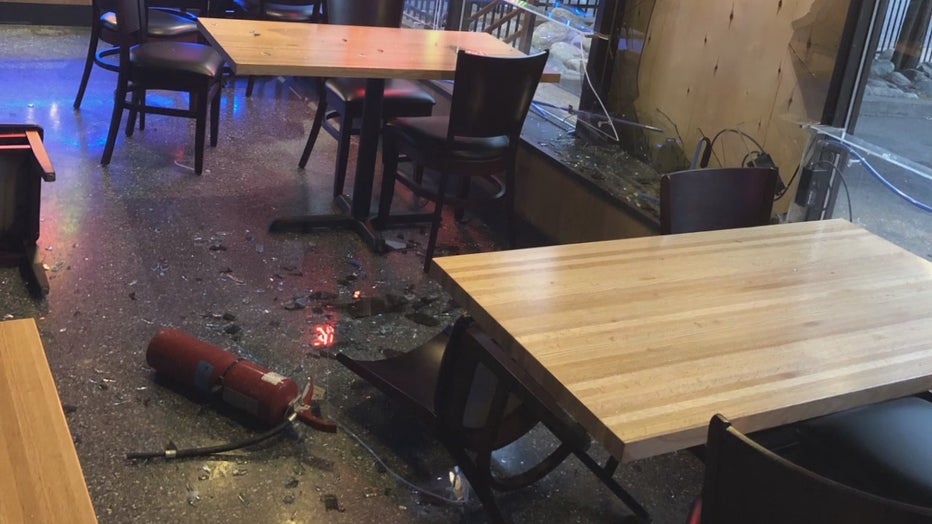 Looters damaged Lotus Restaurant in downtown Minneapolis amid a night of violence on August 26, 2020. (Yoom Nguyen)

Nguyen says police arrived pretty quickly and people scattered, describing it as kind of turning point. He also said it was a moving moment because people started cheering from the balconies of nearby apartments, apparently applauding the police and for an end to the chaos.

Even though there will be a price to pay mentally and for broken windows, smashed walls, a stolen cash register and more, his restaurant will reopen in a few days. Nguyen will welcome back the customers he loves in a city and country he still adores. Born in a war torn Vietnam, he spent three years in a refugee camp before moving to the United States. He says the unrest is not who we are.

“I love this country,” said Nguyen. “It’s the best country in the world. I traveled all over the world, wouldn’t trade it for the world.”