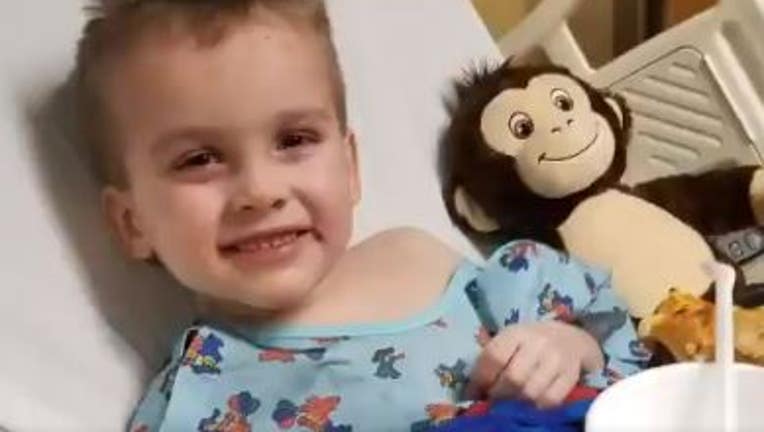 Kyan is a 7 year old dealing with severe eczema, but a new treatment has changed his life.

(FOX 9) - A Minnesota family has battled their little boy’s skin condition for the past seven years. Now they say they’ve found some relief thanks to a Twin Cities doctor who never stopped advocating for them - and they think their solution could help others too.

Kyan Larkin, 7, finally feels free to do all the things a little boy can do.

A Minnesota family has battled their little boy’s skin condition for the past seven years. Now they say they’ve found some relief thanks to a Twin Cities doctor who never stopped advocating for them - and they think their solution could help others too.

Kyan is finally comfortable in his own skin.

"When my skin was not doing that good, I felt like I wasn’t free or something," he said.

He was diagnosed with atopic dermatitis – or eczema - when he was six months old, but his mother, Cassie Larkin, believes it started even earlier.

Eczema is a skin condition common among children, and M Health Fairview pediatric dermatologist Dr. Sheilagh Maguiness – who treats Kyan – estimates that up to 20% of children in the U.S. are affected.

But Kyan’s condition was more severe. He uses topical creams, medications, diluted bleach baths and even cotton gloves to protect his hands from infection. But, they weren’t always working, and the eczema was making life miserable.

It was hard to even hold a pencil with open sores, and there were constant concerns about skin infections and hospitalizations.

"I couldn’t bend my fingers like this," he demonstrated.

"We always had to be careful with him, and at a point you don’t want to be careful," Cassie added. "As a kid, you want to go run and do all the things that everyone else is doing, so to try and limit that you could really tell kind of crushed his spirit a little bit."

Then in 2017, they got some good news: a new kind of injectable medication was on the market.

"They found that there are certain molecules, if you target them, the condition will really improve…and that is what this medication does," Dr. Maguiness said.

The drug Dupixent was initially only FDA-approved for adults, but Dr. Maguiness continued to advocate for Kyan. It would take three more years for the drug trials to be complete on children his age, but one day, the Larkins got a phone call.

"I started bawling because it was like a light at the end of the tunnel had finally arrived," Cassie said.

Kyan’s first round of the treatment came this past summer.

"It comes already premeasured so we don’t have to measure out the medicine. We pinch the skin and inject it in by pushing down on that," Cassie explained.

And while things didn’t change right away, the twice monthly injections began to pay off after about three months with clear skin.

"To see him now completely thriving and free from all those burdens is awesome," Dr. Maguiness said.

Now, the Larkins say the pieces of the puzzle are all finally coming together.

"It’s a release, it’s kind of a freedom that we never knew."

And for Kyan, it’s a new outlook on life.

"Now that I can do that stuff, now I feel like I’m free because I get to do what other kids get to do," Kyan said.

The drug Dupixent is currently approved for those age six and up. Clinical trials are underway for those younger than six years old. Dr. Maguiness added that it’s really only used for patients who have tried other topical prescription creams without success.