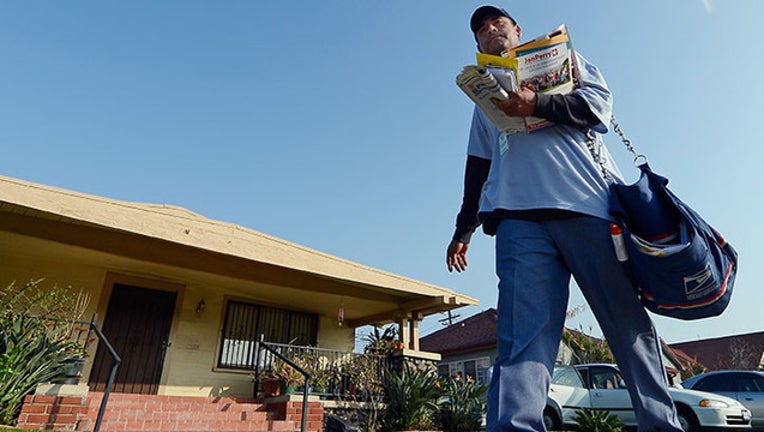 MINNEAPOLIS (KMSP) - The number of U.S. Postal Service employees attacked by dogs continues to fall nationwide, but USPS is hoping technology can continue to reduce these attacks. The hand-held scanners used by mail carriers to confirm customer delivery now include a feature to indicate the presence of a dog at an address.

Of course, dog owners need to notify the Postal Service about their pet.

The package pickup application at usps.com asks customers to indicate if dogs are at their address, which allows USPS to send alerts to the mail carrier scanners. Some dog owners may also see a notice in the mailbox from the Postal Service.

Stories from the mail route

The following are actual stories of mail carrier encounters with dogs, provided by the U.S. Postal Service.

Regina: Regina is a regular letter carrier who was delivering to a resident where she never had a problem with a dog until this one day. The house had a mail slot at the front door. As she was bending down to put mail through, she noticed the door was ajar a tiny crack and that’s when a dog came charging at her. With a quick response, she was able to pull the door shut and keep it closed. There was glass near the door and the dog charged the glass and broke it with its head. Luckily, the homeowner rushed to see what was going on. Regina immediately notified her supervisor and explained the situation. Within days, the homeowner put a mailbox in the front of his house.

Angela B: On Angela’s route, a large dog was off his leash when he charged after her and luckily she stayed alert. She did not deliver to the home and alerted her supervisor.

In a separate incident, she walked towards a house where she realized there was a dog sitting on the front porch. Thankfully, a leash prohibited it from attacking. Again, she did not deliver to the home and alerted her supervisor.

Michael C: Michael was in the back of his truck sorting mail when a dog got loose from its owner and jumped into the back of his truck, biting him on the wrist. The dog was on a leash being held by its owner. Unfortunately, the dog owner was texting on a cell phone as the dog loosened its grip and ran to bite Michael inside of his truck. He went to a hospital and received 10 stitches after this attack.

When a carrier delivers mail or packages to your front door, place your dog in a separate room and close that door before opening the front door. Dogs have been known to burst through screen doors or plate glass windows to attack visitors.

Parents should remind children and other family members not to take mail directly from carriers in the presence of the family pet. The dog may view the carrier handing mail to a family member as a threatening gesture.