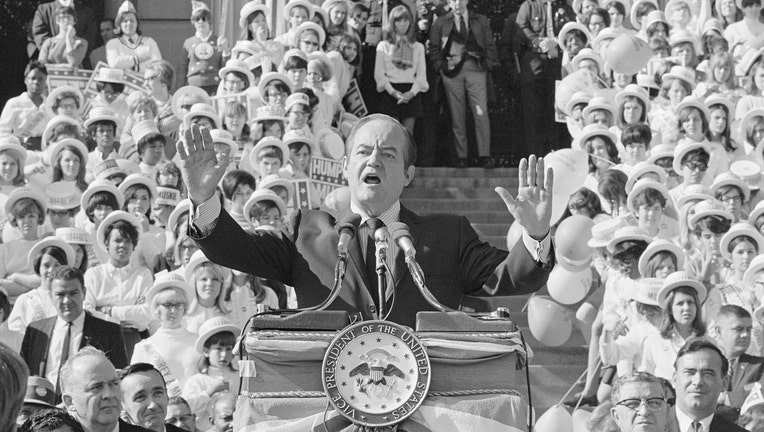 Hubert Humphrey, Vice President under Lyndon Johnson, makes a speech during an unsuccessful attempt at the presidency in 1968. (Wally McNamee/CORBIS / Getty Images)

(FOX 9) - Minnesotans are one week away from heading to the polls on Super Tuesday, where this state is one of 14 holding primaries to help select the eventual presidential nominees.

It’s a process that has a unique history with Minnesotans playing a central role.

Minnesotans are one week away from heading to the polls on Super Tuesday, where this state is one of 14 holding primaries to help select the eventual presidential nominees.

“We would not have the nomination battle going on this year if it wasn’t for three Minnesotans,” Jacobs said.

Jacobs said the three Minnesotans changed the arc of presidential elections starting in 1968.

“You had Eugene McCarthy, who ran against an increasingly unpopular Lyndon Johnson, who had gotten the country deeply involved in the Vietnam War,” Jacobs described.

McCarthy ran an insurgent campaign against the sitting president of his own party. By March 1968, McCarthy’s rising popularity and rising opposition to the Vietnam War brought President Johnson to the breaking point.

Johnson was out. Hubert Humphrey was in.

The Vice President and former Minnesota Senator went to the Chicago convention without entering a single primary. The party bosses wanted Humphrey. Protestors wanted peace, but instead they got Chicago Police.

“And, as a result of this fiery convention and Hubert Humphrey’s nomination, there was a backlash and part of that backlash was to call for a reform of the nomination process to make sure that the people’s voice was hear,” Jacobs said.

The result was a commission headed by a third Minnesotan, Congressman Don Fraser, along with South Dakota Sen. George McGovern.

The McGovern-Fraser commission laid out a set of reforms ensuring future candidates could only win the nomination by winning a majority of delegates in a primary voting system.

“There have been some changes, but basically, the McGovern-Fraser rules in 1971 have dictated the primaries of both the Democratic and Republican parties,” said Jacobs.

Jacobs argues that the attempt to democratize the process has done the opposite, however.

Between the Democratic Party caucuses in Iowa and the first two primaries in New Hampshire and Nevada, only 581,000 people have voted, and most of them ideological activists who Jacobs argues don’t represent the rest of the country.

“So, this is a process that stretches creditability as a truly democratic process. It might be one of those cases of unintended consequences,” he said.

Jacobs made the case for a series of regional primaries across the country so that no state has disproportionate influence over the selection of the candidates.

Minnesota has had its own challenges. The state is moving to a primary this year after the state legislature abandoned the caucus system in what many criticized as disaster in 2016.