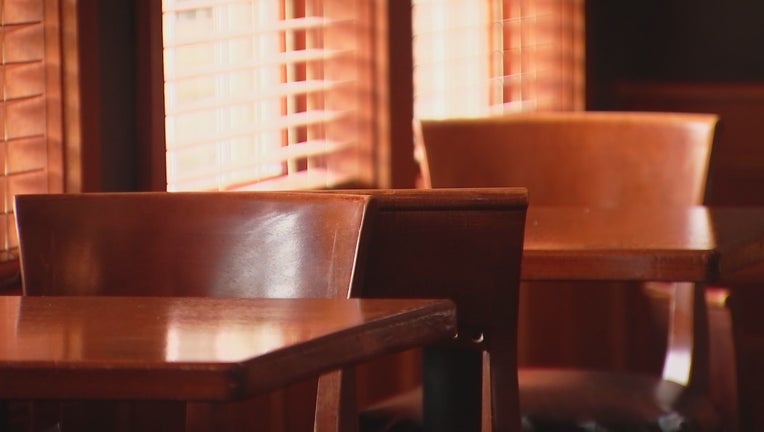 Empty tables at a Minnesota restaurant amid the pandemic. (FOX 9)

ST. PAUL, Minn. (FOX 9) - Minnesota lawmakers have struck a deal to send $216 million in cash relief to businesses hit by the coronavirus pandemic and mandatory shutdowns, but there's no agreement to extend unemployment benefits to laid-off workers.

The Legislature is set to convene for a special session Monday, and lawmakers have been racing to reach an agreement. But a bill is unlikely to pass the Democratic-controlled House without an unemployment benefit extension.

Minnesota lawmakers have struck a deal to send $216 million in cash relief to businesses hit by the coronavirus pandemic and mandatory shutdowns, but there's no agreement to extend unemployment benefits to laid-off workers.

So far, the deal on business relief includes:

--$100 million in cash grants through the state Revenue department to businesses affected by forced closures and seen their revenue dip by 30 percent or more, on the following terms:

--$14 million in cash grants though the state Economic Development department to movie theaters and large convention centers that have seen business dip by 30 percent or more:

--$102.5 million in cash grants through a program run by each county, targeted for businesses that weren't shut down but were affected, like restaurant suppliers or cleaning companies:

State Sen. Eric Pratt, who is among the Republican negotiators on the package, said the first round of relief -- $100 million through the Revenue department -- could be sent out later this month.

"The goal of this is while their doors are locked, we don’t want them putting plywood in the windows. We want them to be able to survive these next few weeks," said Pratt, R-Prior Lake. "Hopefully the governor ends this shutdown and we can get these businesses back up and running and people back to work."

State Rep. Tim Mahoney, who is central to the DFL negotiations, said lawmakers have hit a wall on extending unemployment benefits. Mahoney said there are key differences:

"There is no separation for me between the workers and the businesses," said Mahoney, DFL-St. Paul. "We need to take care of both. Or both of them will go down.”

Senate Republicans may be alone in their opposition to a 13-week extension. House GOP Leader Kurt Daudt said his caucus would be willing to support closer to the full extension.

Hospitality Minnesota, the state's trade group representing restaurants, hotels and the rest of the hospitality industry, said it supports the business relief deal lawmakers agreed to Thursday but raised concerns that hotel properties would not receive immediate relief.

The Minnesota Chamber of Commerce put forward a series of requests, including tax relief and waiving of regulatory fees.

House Democrats are also pushing for a $500 one-time payment to 31,000 low-income families, housing assistance, a relief program for riot-damaged businesses in Minneapolis and St. Paul, and a regulatory fee waiver for businesses.

Walz has delayed until Monday an announcement on whether he'll keep thousands of businesses closed to deal with the pandemic. He had planned to make the call on Friday, but a spokesman said a decision was still in the planning stages. The governor has not been optimistic about lifting restrictions.