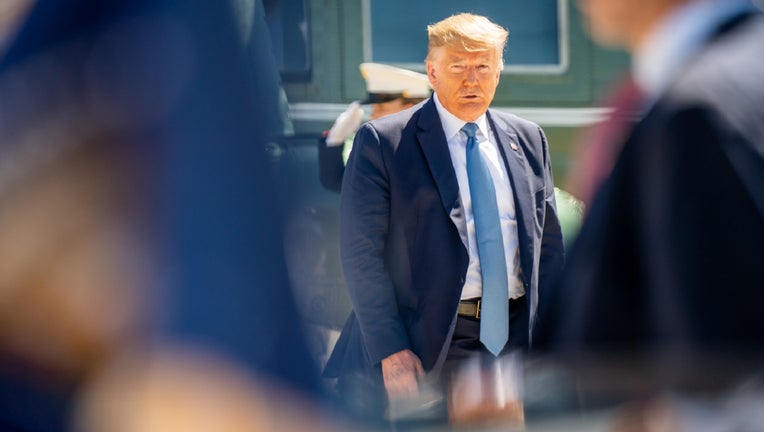 “The president must be held accountable. No one is above the law,” Pelosi said at a news conference late Tuesday afternoon.

Trump called the swirling controversy a “witch hunt,” echoing his refrain against the investigation into Russian interference in the 2016 election that implicated many of his subordinates.

“I'm leading in the polls. They have no idea how they stop me. The only way they can try is through impeachment,” the president told reporters at the United Nations. “This has never happened to a president before. There's never been a thing like this before. It's nonsense.”

Trump said Tuesday that the U.S. froze $391 million in aid to Ukraine, and is accused of using the money to pressure Ukraine’s president to investigate Biden and his son’s work. But Trump gave a different explanation for freezing the aid, faulting European countries for failing to make their own financial commitments.

“I'd withhold (money) again, and I’ll continue to withhold until such time as Europe and other nations contribute to Ukraine,” said Trump, who said the funding has since been released. “There was no pressure put on (Ukraine) whatsoever. But there was pressure put on with respect to Joe Biden. What Joe Biden did for his son, that's something they should be looking at.”

Trump later tweeted that his administration on Wednesday will release a “complete, fully declassified and unredacted transcript” of the phone call.

Trump has not said whether his administration will provide Congress with a whistleblower complaint about the Ukraine situation.

The House Intelligence committee is demanding that the president’s director of national intelligence provide the complaint by Thursday. That committee is one of six panels tasked with doing the impeachment investigation, Pelosi said.

Joe Biden’s son was on the board of a Ukrainian gas company while Biden was vice president, but the Bidens do not face any evidence of wrongdoing. Joe Biden said Tuesday that Trump was “shredding” the U.S. Constitution.

“If he continues to obstruct Congress and flaunt the law, Donald Trump will leave congress in my view no choice but to initiate impeachment,” Biden said during a news conference in Delaware.

The story has developed rapidly since this weekend. By Monday, House Democrats were clamoring for impeachment proceedings. The calls were more widespread than they were after the Russia investigation, with even some moderate lawmakers from swing districts favoring an investigation.

Among them: Craig and Phillips, who said Trump’s alleged actions with Ukraine were severe enough to warrant an inquiry.

“If this behavior does not rise to impeachment, I do not know what does,” Phillips said in an interview Tuesday.

Neither Phillips nor Craig favored an impeachment inquiry after the release of Robert Mueller’s report into Russian election interference but joined more liberal members of Congress in calling for one this time.

“This is different,” Craig said in an interview. “This is a sitting American president looking at a foreign power and asking them for a personal favor while this government is awaiting U.S. taxpayer military assistance.”

Republicans said Craig and Phillips had joined the “far-left” wing of the party and predicted that impeachment would backfire for Democrats in 2020.
“They have become so radicalized by their hatred of President Trump that they are willing to plunge the nation into a constitutional crisis based on secondhand gossip,” said U.S. Rep. Tom Emmer of Minnesota, who is chairman of the Republicans’ U.S. House campaign arm. “Democrats have lost their sanity.”