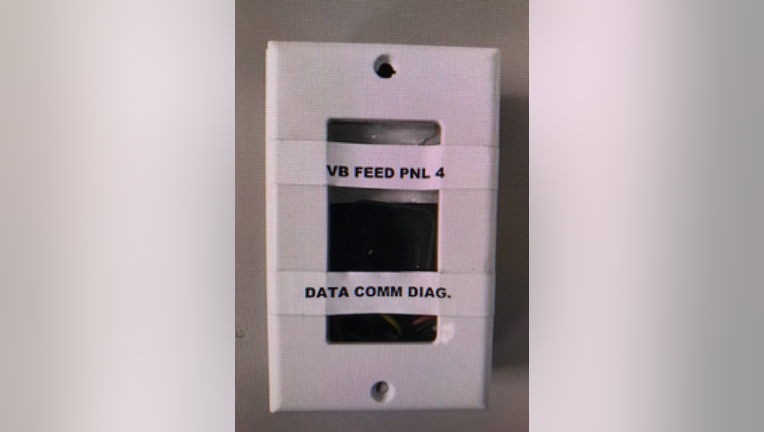 Police shared this photo Wednesday of the box the suspect used to shroud the cameras.

BLOOMINGTON, Minn. (FOX 9) - Police say a man arrested for planting hidden cameras in dressing rooms at stores at the Mall of America admitted to the crimes during questioning.

According to officers, the 41-year-old Elk River, Minnesota man was caught after being spotted by an alert employee. In a search warrant for the case filed by Bloomington police, officers say the suspect set up equipment that looked like electric boxes or ordinary shelves that contained equipment to film and transmit the video via Wi-Fi or Bluetooth to other devices.

Police say a man arrested for planting hidden cameras in dressing rooms at stores at the Mall of America admitted to the crimes during questioning.

Since March, police say employees at Hollister and Forever 21 locations at the Mall of America have discovered four devices set-up in dressing rooms. In addition to those cameras, Bloomington police said they later learned Maplewood police were investigating a camera found in a Hollister location at Maplewood Mall. However, it's not clear if police determined that the case was linked to the Mall of America crimes. In a statement, a spokesperson for Maplewood Mall's operators said they were working with police and were "shocked and appalled by the alleged incidents."

In July 2019, a manager at the Forever 21 at Mall of America said she had spotted a suspicious man who spent an extended amount of time in a dressing room. Shortly after that man left, employees discovered a camera had been installed in a dressing room at the store.

On September 28, the manager spotted the man again. This time, she was able to call the police. Officers responded and then waited outside the dressing room for the man -- who spent nearly an hour inside the stall -- to come out.

When he exited the stall, police found that he had installed the camera in an adjacent dressing room and had gone inside the other room to watch customers undress on his phone.

According to the warrant, when questioned by police, the man admitted to the crimes. He reportedly told officers he set up the cameras for "the thrill" and also admitted to spying on people in his own home.

Police say the man admitted to setting up cameras ten times at the Mall of America and other malls in the Twin Cities metro. Officers say he also admitted to recording video and uploading it to his laptop. When asked if he had watched children undress, police say he admitted that some may have been children but he couldn’t always tell.

In the search warrant, officers say they suspect the man has committed other crimes including child exploitation, child abuse, and child pornography along with invasion of privacy. The warrant is to search the man's iPhone and the data cloud associated with his account.

In a release Thursday, Bloomington police confirmed the arrest and shared a photo of the device they say the suspect used to spy on customers. They are asking anyone who fears they may have been victimized to contact the police department at 952-563-4900.