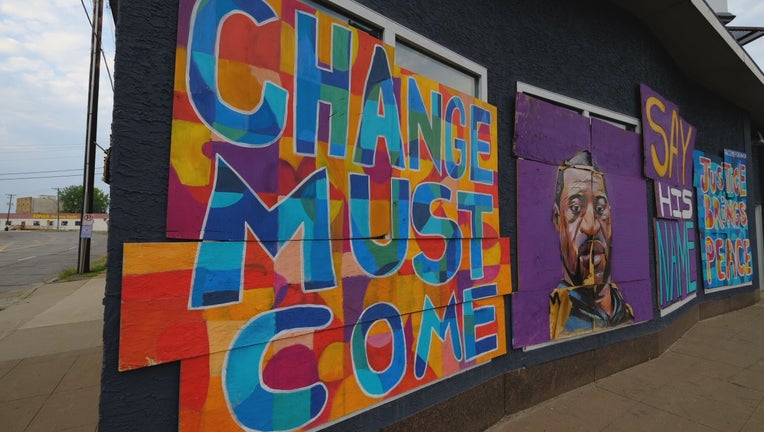 Murals like these sprouted up in the aftermath of George Floyd's death in May.

MINNEAPOLIS (FOX 9) - A group of volunteers in Minneapolis is continuing to work to preserve the murals and artworks created in the aftermath of George Floyd's death.

In a warehouse in Northeast Minneapolis, hundreds of works of urban art have found a temporary home.

A group of volunteers in Minneapolis is continuing to work to preserve the murals and artworks created in the aftermath of George Floyd's death.

"Black women and women of color coordinated the painting of all of these boards," said Leesa Kelly of the mural collection. "To look around this room and see 700 boards and know they are all photographed and numbered and archived and will live on, is a really, really amazing feeling."

Last summer, we told you how "Save the Boards to Memorialize the Movement" has been trying to collect and preserve the murals that popped up around the Twin Cities after the death of George Floyd.

On Friday, about a dozen volunteers picked up around 65 plywood boards with street art on them from several buildings in St. Paul, including Gordon Parks High School, to make sure the capitol city is represented in the collection, too.

"Target was burning in St. Paul. Businesses burned on University Avenue," said Kelly. "So, they were just as much a part of what we were going through as anyone else. Their boards speak to that too."

In all, the group has gathered about 500 paintings rented a climate-controlled space to organize, catalog and store them.

Now, the group is planning an outdoor exhibition in Phelps Field Park about a block from 38th and Chicago over Memorial Day Weekend to mark the one-year anniversary of Floyd's death.

"We just want to be able to continue to tell the story," added Kelly. "Allow the community to heal and reflect and think about our actions."

Eventually, save the boards would like to find a permanent place to display the murals for free for future generations. In the meantime, they'll continue to make sure this collection of Minnesota History doesn't become a thing of the past.

"We never thought we would get this far, but we're excited to see how much further we can go."