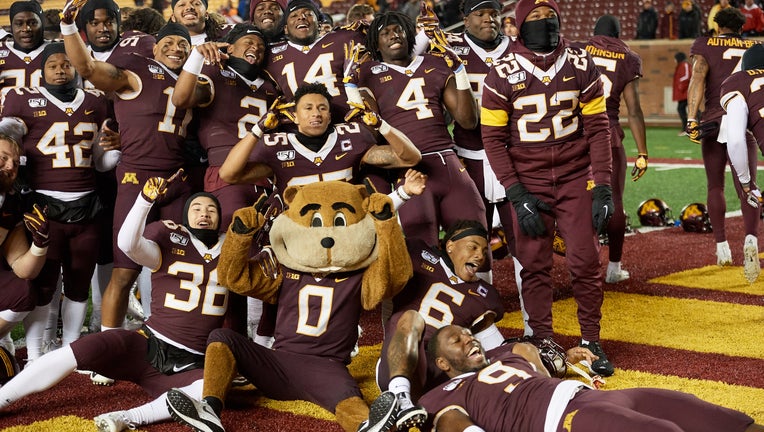 MINNEAPOLIS, MINNESOTA - OCTOBER 12: The Minnesota Gophers pose for a picture after defeating the Nebraska Cornhuskers in the game at TCF Bank Stadium on October 12, 2019 in Minneapolis, Minnesota. The Gophers defeated the Cornhuskers 34-7. (Photo by

ST. PAUL, Minn. (FOX 9) - Saturday is a huge day for the University of Minnesota and the Gophers, and now the football team has the full power of the state's executive branch behind them.

As the Gophers prepare for the team's biggest game of the season, Governor Tim Walz is calling on Minnesota to back the team.

In a proclamation issued Wednesday, and tweeted out by the Gophers, Walz has proclaimed Friday as "Maroon and Gold Friday."

In the proclamation, Walz cites the team's recent success, which includes a ten-game winning streak dating back to last season and being ranked 13th in the AP Top 25, as part of the reason behind the order.

Walz also pointed to the historical significance of the Gophers game versus #5 Penn State, writing: "Only one other time in the last 40 years have two undefeated Big Ten teams met this late in the season."

In its tweet, the Gophers football account added: "Get out your Maroon & Gold this Friday, #Gophers. @GovTimWalz and @LTGovFlanagan said so."

The Nittany Lions will travel to TCF Stadium on Saturday for the match-up of unbeaten teams. Kickoff is at 11 a.m.

Tuesday, the Gophers announced Coach P.J. Fleck had agreed to a seven-year contract extension, worth $4.6 million per year plus incentives.