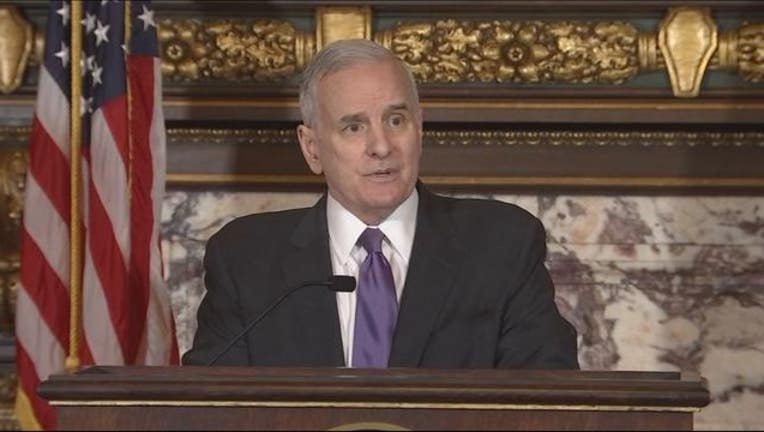 The Minnesota House voted 74-57 to pass the bill and the Senate voted 35-32. Both chambers are controlled by Republicans. Lawmakers who supported the bill hope the savings will be passed on to consumers in the form of reduced health insurance premiums for 2018.

Democrats say the plan is too expensive and a bailout for deep-pocketed health insurance companies. They prefer creating a public option for people to buy into MinnesotaCare, which is usually reserved for low income Minnesotans.

Last Thursday, March 30, 2017, I received the Conference Report passed that day by both the Minnesota House and Senate, which appropriates $542 million of state funds in the
FY18-19 Biennium to subsidize insurance companies operating in the so-called Individua  Market. I recognize that this bill has been a top priority of your respective Leaders, since the Session's beginning; and I commend you and them for moving it expeditiously through the legislative process.

I thank you for involving members of my administration, including senior agency officials, governor's office staff, and myself, in your deliberations. I trust you feel that we were fully engaged with you, whenever requested, throughout that process. In particular, I am glad that my staff was able to help clarify with Centers for Medicare and Medicaid Services the language necessary to qualify this new program for a federal cost-share of up to 30 percent, which would save us about $162 million while protecting federal funding for
MinnesotaCare

Unfortunately, two of my main concerns about the bill were not addressed in the final Conference Report. The first was the source of funding for the insurance subsidies. In my March 29th letter to the two of you, I reiterated what I had been saying during previous weeks: "The conference report uses the Health Care Access Fund and the General Fund to cover the state responsibility for reinsurance. I believe reinsurance should be funded by a tax on the industry itself, as was the Minnesota Comprehensive Health Association. The General Fund and Health Care Access Fund dollars should be used for statewide priorities like schools, early childhood education and health care for low-income Minnesotans. Furthermore, it is unwise to use Health Care Access Fund dollars without repealing the sunset of the two percent provider tax that sustains the fund."

My proposal was ignored, because of, I am told, opposition by the insurance industry. Thus, the bill not only provides insurers with up to $542 million of taxpayers' dollars, as direct subsidies to their businesses, but also allows them both to dictate where that money shall come from and to evade any financial responsibility for their own aid program.

Secondly, my proposal to include a MinnesotaCare Buy-In option for Minnesotans purchasing health insurance on the Individual Market was rejected. As a result, private insurance companies will decide our citizens' options, including the extent of coverage, the composition of the provider networks, and the cost of their insurance.

The MinnesotaCare Buy-In would have added some much-needed competition into the Individual Market. It could have offered many Minnesotans more comprehensive health care coverage, through more accessible provider networks, at lower insurance costs, than will be available to them under this bill's limitations. Why would the insurance companies' preferences and profits be placed ahead of the people's best interests?

Finally, I am deeply concerned that this $542 million subsidy is being offered to insurance companies, who refuse to make any commitments about their participations in next year's Individual Market or the insurance rates they will charge Minnesotans. On March 16, 2017, I wrote the attached letter to the Chief Executive Officers of each of the presently participating insurers. I said, in part, " If the Legislature chooses to advance these reinsurance bills, it is imperative that your industry publicly commit to Minnesotans that, moving forward, you will specifically: 1) sell products statewide in the individual market and; 2) lower premiums to a level that will make insurance coverage more affordable than it is today. I ask that you provide consumers, the Legislature, and me with these public commitments as soon as possible Minnesotans deserve to know that a program of this scale and cost will actually have the intended results of stabilizing the individual insurance market and improving its affordability for consumers. Thank you in advance for your swift reply."

To date, I have not received even the decency of a written reply from a single one of those CEOs, much less their answers to my questions. I know that they have refused to provide those same assurances, when asked by individual legislators and by legislative committees. Yet, this bill would contribute $542 million of public monies to their bottom lines without even the acknowledgement of my request for information or the information I requested.

On March 22, I stated publicly that I would not sign a Reinsurance bill until I received written replies to my questions from the insurance executives. Having received no responses, I could not sign this legislation for that reason alone, in addition to my other concerns previously stated.

However, I agree with you, this bill's authors, and those legislative leaders, who believe that this subsidy must be committed to the health insurance industry at this time, to try to induce their participation in Minnesota's Individual Market in 2018 at the lowest possible rates. Thus I will allow this measure to become law by not acting upon it within the requisite three days, which end at midnight tonight. I will deposit, without signature, in the office of the Secretary of state, Chapter 13, House File 5.

I challenge Minnesota's health insurance companies to provide our citizens with good value for their $542 million. I challenge the health plans to honor their promises to the Department of Human Services, to negotiate and work in good faith, and honor their commitment to service on behalf of the 1 million Minnesotans on Medicaid who rely on them. I challenge all of the companies to become partners with my administration in a common cause to once again provide Minnesotans with the best health coverage at the most affordable costs.