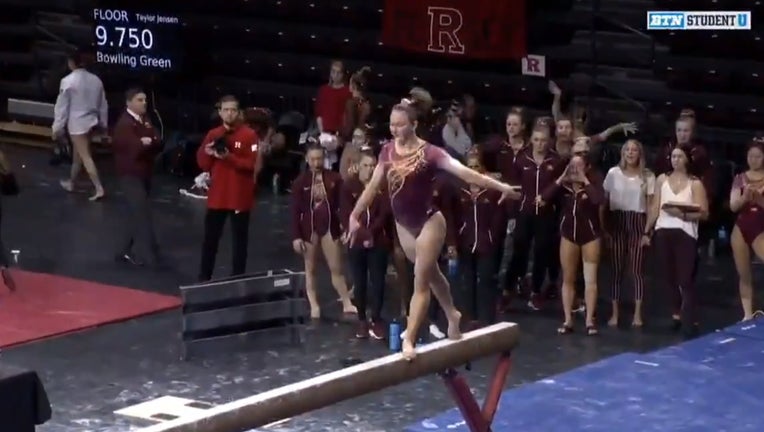 Lexy Ramler's routine on the beam wowed the judge on Saturday to score a perfect 10. (Gophers/Big 10 Network)

MINNEAPOLIS (FOX 9) - An incredible performance from a University of Minnesota gymnast is getting national attention.

Saturday, Lexy Ramler scored a perfect 10 with her balance beam routine, which helped propel the Gophers to a team score of 196.875 and first place in a quad meet at Rutgers. The win brought sixth-ranked Minnesota to a 3-1 record on the year.

The perfect 10 routine was Ramler's first and only the third in Gophers history. But, head coach Jenny Hansen said it took a team effort to get the win.

"Every athlete went up there and nailed their routines," said coach Jenny Hansen. "For Lexy to score a 10 was a long time coming. She has done a lot of 10-worthy routines in her life. We are so happy for her."

Ramler's routine, which included a dazzling flip off the beam to a perfect landing, was so impressive it ended up on SportsCenter.

A video tweeted by the team showed the flip ending up as Number 8 on Saturday's countdown.

"The nation is taking notice," the team tweeted. "@LexyRamler and the #Gophers are just getting started."