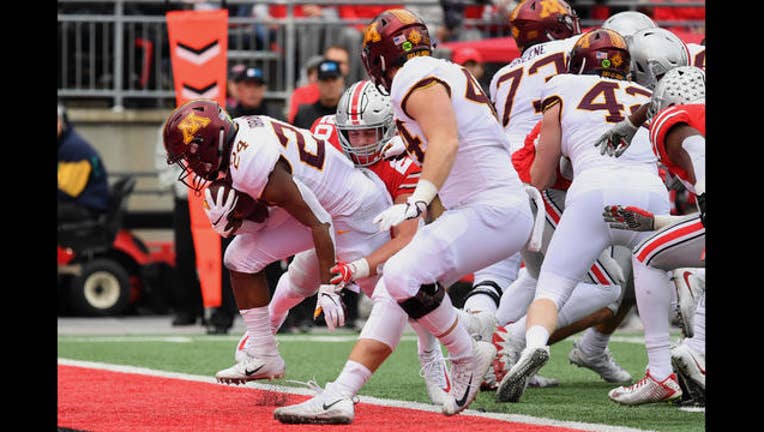 COLUMBUS, Ohio (AP) - Dwayne Haskins threw for 412 yards and three touchdowns as No. 3 Ohio State held off persistent Minnesota to win 30-14 Saturday in a game where little went well for the Buckeyes beyond their passing game.

Hill also made the play of the game with a turn-around, one-hand grab that he turned into a touchdown in the second quarter. He had a career-high nine catches for 187 yards.

For the second straight week, a heavy underdog came into Ohio Stadium and shut down the Buckeyes' running game. The Gophers held tailbacks J.K. Dobbins and Mike Weber to a total of 86 yards, without a single carry longer than 11.

"A lot of credit to Minnesota," Ohio State coach Urban Meyer said. "They came in and swung very hard."

For Minnesota, Mohamed Ibrahim turned in a career day of his own, rushing 23 times for 157 yards and two scores.

Also for another week, Ohio State showed a weakness for giving up big plays. Ibrahim ripped off runs of 25 and 34 yards on the way to 105 yards in the first half.  Minnesota had 396 total yards, with Ohio State piling up 504 behind Haskins' passing.

Minnesota: The Gophers hurt themselves with three turnovers, two of which led to 10 points for the Buckeyes, and two missed field goals. True freshman walk-on quarterback Zack Annexstad threw two interceptions, but also flashed some potential.

Ohio State: The Buckeyes stay unbeaten despite making plenty of mistakes and Minnesota staying in the game until almost the end. Problems persist with running the ball and the defense allowing big plays.

Minnesota: At Nebraska on Saturday.

Ohio State: At Purdue on Saturday.