It was an exciting homecoming game Saturday, with plenty of former students and many former players back in town and they definitely brought their school spirit.

MINNEAPOLIS (FOX 9) - It was an exciting homecoming game Saturday, with plenty of former students and many former players back in town and they definitely brought their school spirit.

After a 4-0 start to the year, Gopher football fans had plenty to celebrate this homecoming weekend but with the big start to the season, came even bigger expectations for the rest of it.

"I think the start of the season is very elite," said Neel Allen. "You know you start strong, you have to finish even stronger."

On their home turf, the maroon and gold continued Big Ten play on Saturday against the Purdue Boilermakers while fans in the stands tried something different: a stripe out. Each section alternating maroon and gold for a checkered effect around Huntington Bank Stadium. 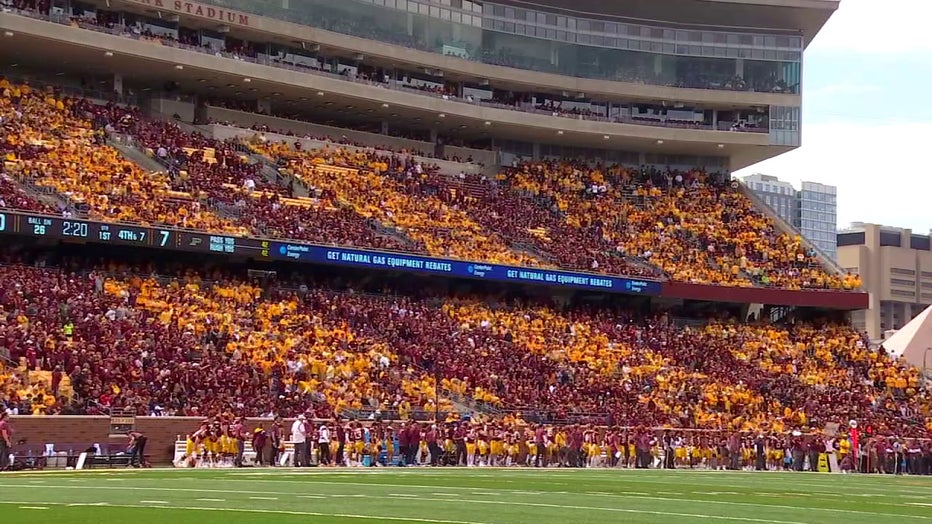 The "stripe out" was in effect on Saturday for the Golden Gophers. (FOX 9)

Many former Minnesota football players were glad to be back in Dinkytown to support the new crop of athletes on the field.

"It means a lot for us we come back we get to see the new equipment, new stadium and also bond with all the players," said Craig Scruggs. "So it’s a brotherhood."

"It’s always great to be back being on campus it's like being at cheers, everybody knows your name," said Neel Allen.

While there was great energy in the stands, it maybe didn't translate to the field, as Purdue stunned the Gophers, 20-10.