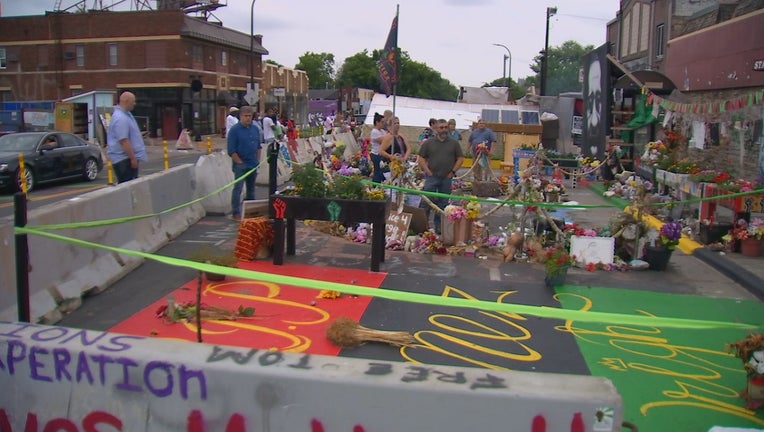 Mourners stopped by George Floyd Square on Saturday, one day after the sentencing of Derek Chauvin. (FOX 9)

"I’m still kind of processing it all," Stacy Perry said. "I mean it is a lot."

The community continues to heal from what the world witnessed on May 25, 2020.

"I’ll still say I watched a Black man die on camera," Samantha said. "That is something that I have to live with for the rest of my life."

"If somebody tells you that they can’t breathe, won’t you just let up?" Jeramie added.

Chauvin has been sentenced to 22.5 years in prison, but reactions to his sentence are mixed.

"It was not what I wanted, but it was more than I expected," Brock Bolton said.

"22 and a half is better than them giving him probation," Perry said.

"They did something; I think they made a step in the right direction," Bolton said. "Hopefully the federal government can step in and do their part too."

A cliffhanger from Derek Chauvin himself in court on Friday also has many people struggling to understand what he might’ve been alluding to.

"There’s going to be some other information in the future that would be of interest, and I hope things would give you some peace of mind," Chauvin told the Floyd family ahead of sentencing.

"That’s just amazing to me that you can go ahead and kneel on a human being’s neck for 10 minutes and think there’s something that’s going to come out to give peace of mind," Bolton added.