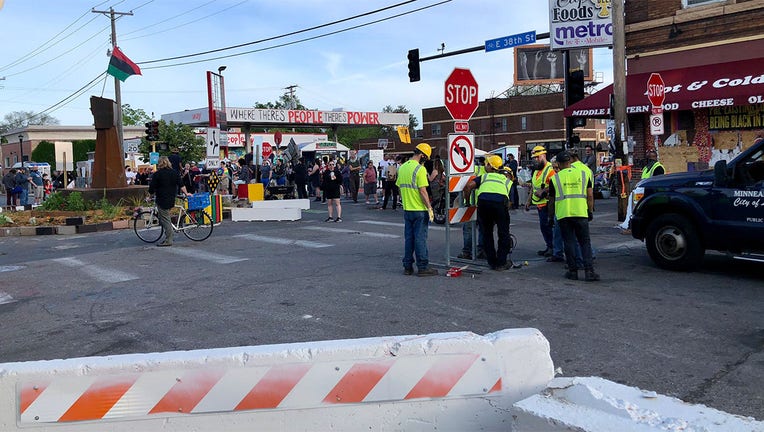 Minneapolis Public Works crews are putting up signs to turn the intersection of 38th and Chicago, also known as George Floyd Square, into a roundabout.

MINNEAPOLIS (FOX 9) - Early Thursday morning, crews began removing the concrete barriers at 38th and Chicago, known as George Floyd Square, to reopen the intersection to traffic, but activists restored the barriers during the day.

Their efforts were met by activist backlash despite one Twin Cities community group's involvement in reopening the area. Leaders from Agape say the process to reopen began months ago, but the decision was not made until last night.

Minneapolis public works crews removed the barricades surrounding George Floyd Square in an effort to reopen the area which has been closed since Floyd's death.

"There's a chance and a time for this community to get back to a new normal. That's what we're trying to establish," said Agape Senior Advisor Steve Floyd.

A spokesperson from the city said George Floyd Square is being reopened to traffic through a "community-led process," and the city is only offering support.

Minneapolis Public Works workers were seen installing signage around the fist sculpture at George Floyd Square to create a roundabout. Barriers are being installed in key areas around Cup Foods to protect those who want to visit the area.

A spokesperson for the community said the streets will be open to traffic in either direction. The garden around the fist sculpture will be moved to other areas of the intersection. 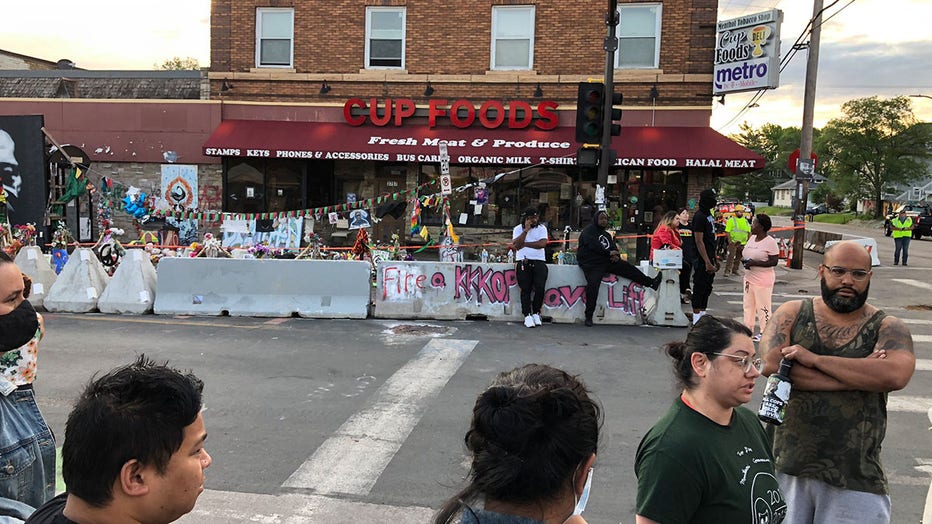 George Floyd Square is being reopened to traffic through a community-led effort.  (FOX 9)

In a news conference Thursday afternoon, Mayor Jacob Frey called George Floyd Square a "critical and known location of racial justice and healing perhaps 100 years in the making," and said Thursday's effort was part of a "phased reconnection" to the square.

He called the square a "historic and important space," but said it's important to "provide social and city services [to George Floyd Square] that have sometimes been missing over the last year."

City Council Vice President Andrea Jenkins, who represents that area, said a "majority" of people called for reopening the intersection and said it is an important part of the "healing process."

Cedric Steele, the owner of Just Turkey, is part of a coalition of businesses that wants 38th and Chicago to reopen in some capacity. Steele said he would be fine with a roundabout or one-way traffic that would also include a memorial for Floyd, which would at the same time not send the few cars and delivery trucks that do come through to navigate through alleys.

"A lot of times in the winter, it’s hard for them to get in. I can’t get my orders in," said Steele.

Thursday afternoon, community members hosted a news conference decrying the reopening of the intersection, calling it an effort to "delete history," according to CAIR-Minnesota Director Jaylani Hussein. By noon, the barriers around the square had been restored by community members.

Community members and a relative of George Floyd react to city's attempt to reopen George Floyd Square more than a year after his death.

Caregivers of George Floyd Square and activists outlined a series of demands for the city of Minneapolis, including investments in the 38th and Chicago neighborhood. Hussein lamented that the city had not met those demands more than a year after Floyd's death.

"Why is a grieving family the only one to invest in this neighborhood?" Hussein asked, referring to the George Floyd Family Foundation's efforts in the area.

City workers removed barricades surrounding George Floyd Square, however, activists put up makeshift ones in their place to keep the area closed to trafic.

Activist Marcia Howard said the city wants the memorial to stay, but that the community should not give it up without having its demands met.

"They want the fist without the fuss," she said.

"We've got their baby, but if they want it back, they're going to have to pay some child support," she added.

George Floyd's aunt, Angela Harrelson, also spoke at the event, saying the city never contacted her. She called on Mayor Jacob Frey to reach out. 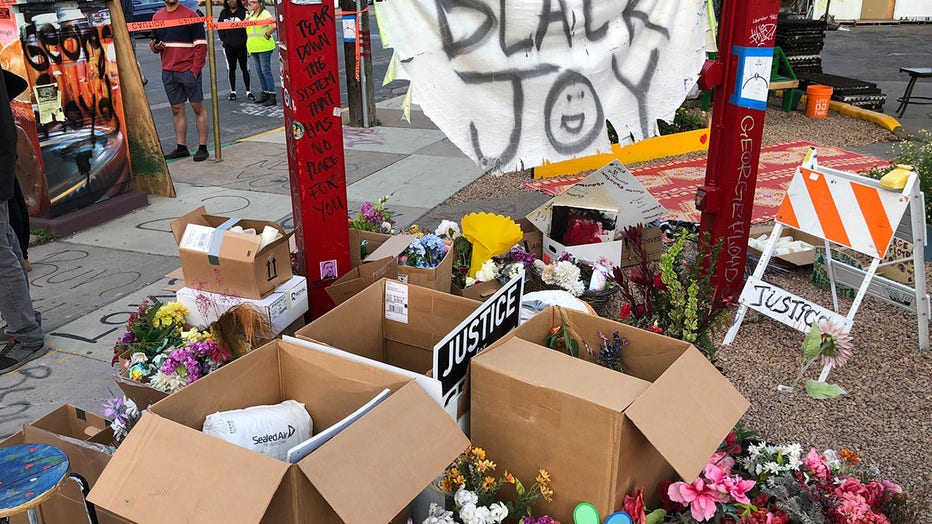 Community members are working to preserve the items at the memorial to George Floyd at 38th and Chicago.  (FOX 9)

The intersection has been closed to traffic since the summer of 2020 after the murder of Floyd by Minneapolis police officer Derek Chauvin.

"The City’s three guiding principles for the reconnection of 38th and Chicago have been community safety, racial healing and economic stability and development for Black, Indigenous, Latinx, Asian and other communities of color.

The Agape Movement brought together community leadership to begin facilitating the phased reconnection this morning, with the City playing a supportive role. We are grateful for the partnership.

We are collectively committed to establishing a permanent memorial at the intersection, preserving the artwork, and making the area an enduring space for racial healing.

Alongside City leadership, we have met on a regular basis with community members to discuss both the short-term path toward reconnecting this area and the long-term plan for the neighborhood with sustained investments to help restore and heal the community."