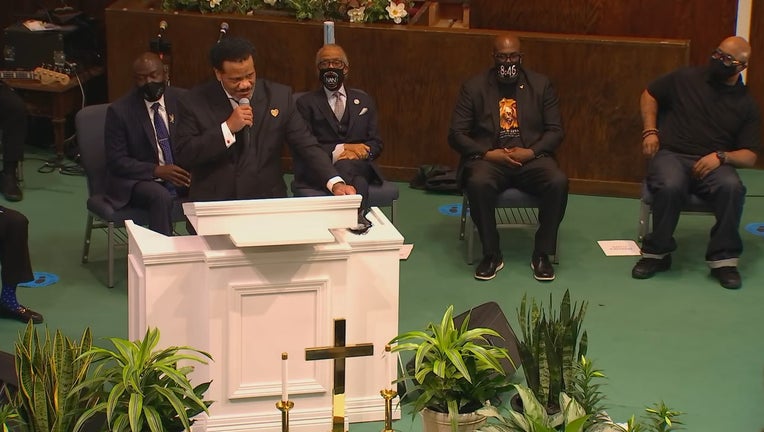 MINNEAPOLIS (FOX 9) - A vigil hosted by Reverend Al Sharpton and the family of George Floyd Sunday night in Minneapolis honored the life of George Floyd, ahead of opening statements in the trial of one of the police officers charged in his death.

A vigil hosted by Reverend Al Sharpton and the family of George Floyd Sunday night in Minneapolis honored the life of George Floyd, ahead of opening statements in the trial of one of the police officers charged in his death.

The gathering to honor Floyd comes just hours before attorneys, jurors, and Judge Cahill will gather at the Hennepin County Courthouse on Monday morning for opening statements in the case of Derek Chauvin, the first former Minneapolis police officer to stand trial in Floyd's death.

Chauvin was the officer seen on video kneeling on Floyd for more than eight minutes last May. Sunday, the family made it clear what they wanted out of the trial: Justice.

Reverend Al Sharpton is urging Americans and people worldwide to join in a moment of remembrance for Floyd....

"My brother didn't ask for this. I didn't ask to be apart of this fraternity that no one wants to be a part of," said George Floyd's brother Philonise Floyd. "I think about my brother every day, every night. I think about his kids, I think about the next generation's kids... people growing, so they won't have to go through what we are going through."

"This world is divided, we need to come together," added Philonise. "That's the only way that we will get justice for George... We need a conviction."

In Reverend Sharpton's eyes, this case means more than one man's death. He says it will show if America is ready to hold police accountable for wrongful actions.

"The fact that they will try to discredit and besmirch the character of George Floyd does not in any way explain," said Rev. Sharpton, "how you, with a man laying helpless, unarmed, for 8 minutes and 46 seconds, at no point did you stop and deal with the value of his life."

Opening statements from both the prosecution and defense are set to start Monday morning. FOX 9 will have full coverage of the entire trial, from gavel to gavel, both on-air and online.