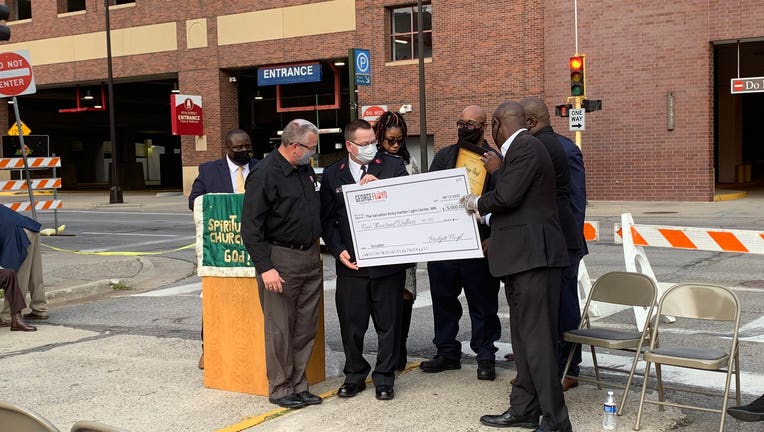 George Floyd Foundation awards its first donation Sunday night to a place where Floyd worked during his time in Minneapolis.

MINNEAPOLIS (FOX 9) - The family of George Floyd launched a charitable foundation in his honor Sunday night.

The first donation, of $5,000, was given to the Salvation Army’s Harbor Light Center, which was a place that meant a lot to the Houston native.

The family of George Floyd launched a charitable foundation in his honor Sunday night.

The Minneapolis homeless shelter was the recipient of the foundation’s very first donation. The family said it was a place that meant a lot to Floyd during his time in Minneapolis. He worked security there for several years and also attended.

“This being where George worked, where George loved to be,” said Bridgett Floyd, George Floyd’s sister. “He loved helping the community and I want them to be able to keep it going.”

Crump refuted the defense’s claim that Floyd died of complications from an overdose, saying they won’t allow that to be Floyd’s legacy.

“The legacy of George Floyd, it won’t be a legacy that those officers are trying to say, talking about he died from an overdose. The only overdose was excessive force and racism by the Minneapolis Police Department,” Crump said.