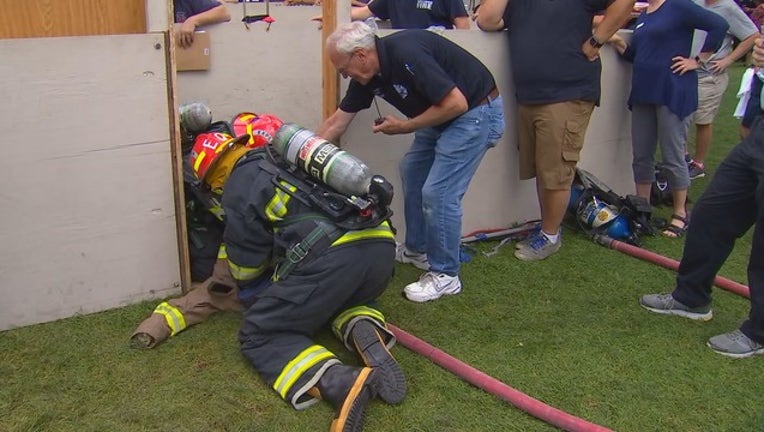 FALCON HEIGHTS, Minn. (FOX 9) - There's no better place to get your message out to a big crowd than the Minnesota State Fair.

That's exactly what's happening on Governor's Fire Prevention Day with lots of different events happening to spread fire safety tips. We got to witness the Fire Explorer Challenge over at Dan Patch Park. It's a challenge for young people who are interested in a fire service career who are being mentored by departments around the state.

Minnesota Fire Explorers and groups from the Dakotas, Iowa, and Wisconsin took part, competed in different activities - things they would have to do on the job.

It's for bragging rights, but it's also about showing the public what it takes to keep people protected in an emergency situation.

"Part of this is about fire suppression, part of it is about extrication from car accidents," explains Lt. Scott Spinks of the Long Lake Fire Dept. "There's rescuing people from drownings whatever it is we're learning all of it we're trying to teach it to these up and coming firefighters."

"I've been through it testing a bit but I've never does it in person. These are heavier than they were in testing," said Woodbury Fire Explorer Zachery Heaton.

We're told the Fire Explorers Group in Minnesota is one of the biggest in the country – and it's good for the departments too. It helps them recruit in an industry that can be hard to find candidates for firefighting positions.

This was the 21st year for this fire prevention day.