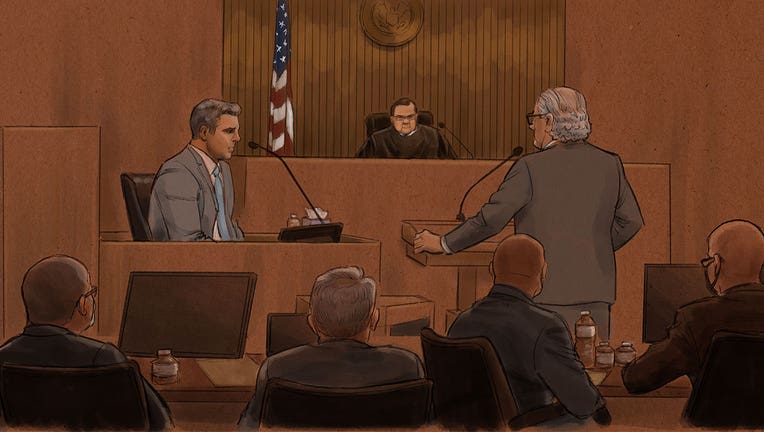 The final witness was one of the defendants, Thomas Lane, who took the stand in his own defense and the last of the three officers in trial to do so.

Lane was fired by Minneapolis police, along with Derek Chauvin, Tou Thao and J. Alexander Kueng the day after George Floyd was murdered in May 2020.   Lane testified that he found out he’d been terminated while "sitting in a Subway parking lot.  I read a news article. That’s how iI found out I was fired."

Lane, Kueng, and Thao are being tried on federal charges of denying George Floyd his constitutional rights.  All three are accused of failing to provide medical aid.  Kueng and Thao face an additional charge of failing to intervene in Chauvin’s deadly use of force.  Chauvin pled guilty to similar federal charges in December.

Under direct questioning by defense attorney Earl Gray, Lane testified about the struggle to get George Floyd into the backseat of his squad.  Floyd resisted getting inside, grew very agitated and complained of claustrophobia.  Lane says he tried to calm him down and "just tried to assure him I’ll stay here.  I offered to roll the windows down, put the air on for him, just let him know I’d stay with him."

After he, Kueng, and Chauvin wound up taking Floyd to the ground to hold him, Lane called for an ambulance after noticing Floyd’s face was bloody.  Lane thought he had hit the door frame of the car.  An ambulance was called for Code 2, which means it’s not urgent and no need for lights and sirens.

Four minutes after Floyd was on the ground, he stopped resisting and Lane said they decided to continue to hold him in place.  This is when Lane asked, for the first time, if they should roll him on his side, noting the possibility of excited delirium, a controversial term for an agitated state that happens after drug use.

He’s referring to Derek Chauvin, who had 19 years of experience.  Lane was on his 4th shift.

"It just seemed reasonable at the time," Lane said. "We got an ambulance coming Code 3," noting that the ambulance had already been told to move to an urgent response and come as fast as possible using their lights and sirens.

Lane testified he checked for a pulse on Floyd’s ankle, but couldn’t find one, but within seconds he could see and hear sirens of the ambulance which was a block and a half away.  When the paramedic walked up and checked Floyd’s carotid artery for a pulse, he took his casual reaction to be a good sign.  He neither ran to his ambulance nor flipped Floyd over for CPR.  "It was just anything kind of reassuring that Mr. Floyd is alright," said Lane.

But then Lane helped load Floyd into the stretcher, he saw Floyd’s face for the first time since he was put on the ground and that’s when he realized there was a problem. "He didn’t look good."

On cross-examination, Lane was pressed about why he did not move Floyd onto his side, as was such a clear part of their training.  When asked that he understood it was dangerous to keep people prone, Lane said "it can be," but several times in response to various questions explained that it depends on the situation.

Lane also answered this way to questions about performing CPR, saying that "if the situation allows, you should try to start that as soon as possible."

The situation that Lane referred to is the possibility that Floyd might have been overdosing.  Asked if it is common sense that people need help when they go unconscious, Lane said "not always. Overdose calls, people would go in and out of consciousness."

When pressed by the prosecutor that checking a pulse does not qualify as rendering medical aid when someone stops breathing, Lane said to his knowledge, Floyd was still breathing.

"I was watching him breathe, ma’am. He was breathing as we were holding him there. I could see his chest fall."

Lane and Kueng are both heard on video saying the Floyd is breathing, but within half a minute later is when medical experts testified Floyd takes his last breath, which is still two minutes before the ambulance arrives.