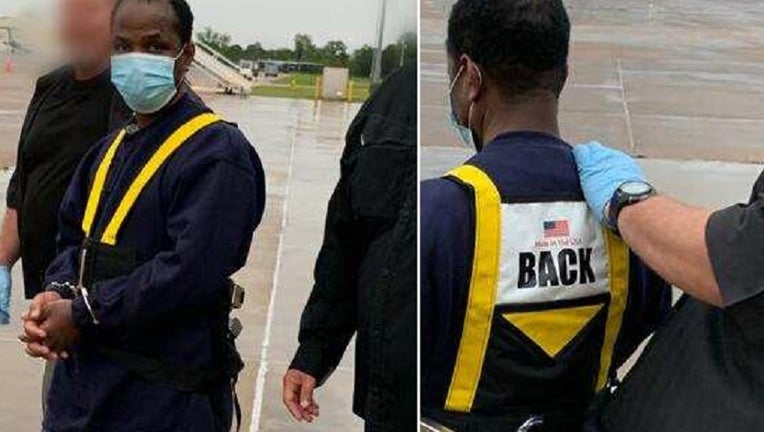 Alexander Mentol Zinnah is escorted to his flight by ICE officials. (Department of Homeland Security / Supplied)

ST. PAUL (FOX 9) - A man who investigators say was once a member of a violent rebel group in Liberia, known for numerous human rights violations, has been removed from the Twin Cities.

According to ICE officials, 56-year-old Alexander Mentol Zinnah was a member of the National Patriotic Front of Liberia (NPFL), a group known for human rights abuses ranging from kidnappings, torture, and massacres.

Zinnah was also a commander in the Liberian National Police under President Charles Taylor, the man who led the NPFL. Taylor was later convicted and sentenced to 50 years in prison for human rights violations.

Zinnah was arrested in 2017 for immigration and parole violations. However, during their investigation, ICE agents learned of Zinnah's history with Taylor's groups.

After review by ICE's Human Rights Violators and War Crimes Center, the agency sought Zinnah's removal. In May 2019, an immigration court issued his final order of removal.

Zinnah was removed Tuesday after exhausting his appeals. He was flown by ICE charter flight to Liberia where he was turned over to Liberian law enforcement authorities.