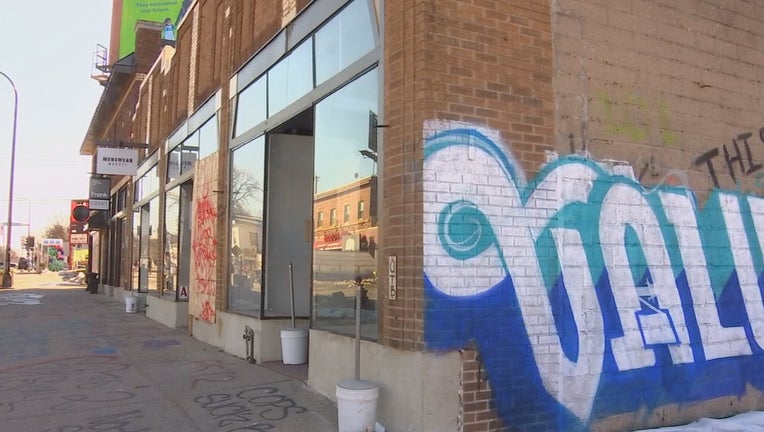 MINNEAPOLIS (FOX 9) - Between the death of George Floyd, the riots and now the trial, it's been a long ten months. For small businesses at E 38th Street and Chicago Avenue in Minneapolis, the struggle to survive is ongoing.

Businesses in that area weren't looted or burned, but after the intersection was shut down, many of them closed.

Building owner at 38th and Chicago struggles amid ongoing closure

For small businesses at E 38th Street and Chicago Avenue in Minneapolis, the struggle to survive is ongoing.&nbsp;

Stebnitz fully supports a permanent memorial to Floyd and respects the demonstrators that remain, but he says the ongoing closure has impacted his business. In 2010, he took six businesses and four apartments that had been vacant since 1990, renovated them and invested everything into making his building successful again.

"By 2019 we had a flourishing building with all the retail spaces filled and all the residential spaces filled," said Stebnitz. "Everything had been renovated, solar on the roof, it was a great picture."

After the intersection shut down and traffic stopped coming through, five of the six retail businesses he housed and two apartments became empty. It’s been like that now for ten months.

The building and tenants weren’t part of a big business; they were all of Stebnitz's business. His spouse works, but the income at the building was supposed to help them raise their foster son. Bottom line, he feels like his small business and many others have simply been forgotten.

"We didn’t have physical damages so we’re not able to collect insurance in the same way," said Stebnitz. "We’re not able to take advantage of the city, the county and the federal grant programs."

Stebnitz says he hasn’t given up hope and remains optimistic.

The mayor’s office told FOX 9 that revenue is down and money from the federal government that could help is minimal. Stebnitz says he’s at least looking for someone to help him and others find an avenue to flourish once again.

"It’s the city I’ve loved for 25 years and I never thought I’d have to question whether the city was my ally," he said.