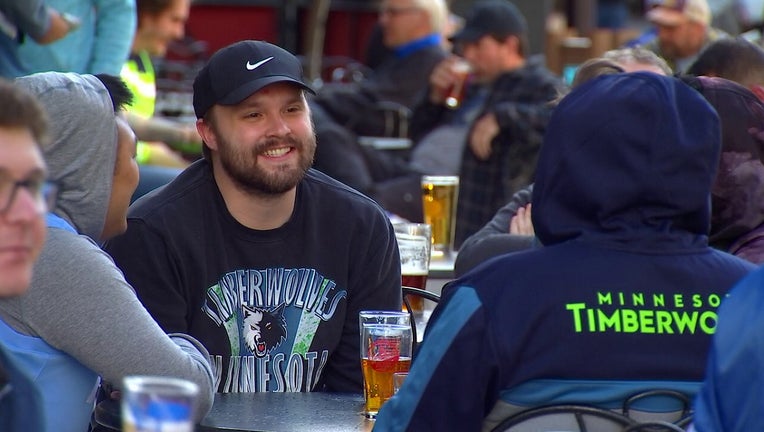 Wolves fans descended on downtown Minneapolis on Thursday for Game 3 of the first round. (FOX 9)

MINNEAPOLIS (FOX 9) - After years of being left out in the cold of the NBA playoffs, Minnesota Timberwolves fans are ready to howl.

"I'm excited. We're going to get a win," said Thomas Peterson of Prior Lake outside the Target Center.

For Wolves fans, NBA playoffs return to downtown Minneapolis is a slam dunk

"We haven't had good basketball in a while, so I'm happy the Wolves are winning. The people are coming out. It's going to be loud."

"I think the city needs it. It's good to see coming out of COVID-19 and everything. Just good to see people out and about and looking lively down here in Minneapolis once again," said Manny Tedeke of Cottage Grove.

The owner of O'Donovan's Pub says the playoffs will bring triple the business they would have had from a Timberwolves game a year or two ago.

"To be honest, it was a little like this in 2018 when Jimmy Butler was here, but really it's been since Kevin Garnett and Sam Cassel and Latrell Sprewell in 2003 and 2004 since we've seen this hype and this buzz," said Dermot Cowley.

While Morris Matthews hopes to share this playoff moment with his son will bring the Wolves a win.

"That's the only reason I'm here. Otherwise, I would be at home watching TV," said Mattews of Eagan.