Later this week, the Smashing Pumpkins will make a stop at the Xcel Energy Center as part of their reunion tour. But more than two decades ago, the band made Twin Cities history during a concert in Minneapolis.

MINNEAPOLIS (FOX 9) - Later this week, the Smashing Pumpkins will make a stop at the Xcel Energy Center as part of their reunion tour. But more than two decades ago, the band made Twin Cities history during a concert in Minneapolis.

Block E may now be home to Mayo Clinic Square and a Loews hotel, but 24 years ago, it was the setting of the biggest concert crowd ever in the Twin Cities.

"It was a big deal. It was the tradition of celebrating summer here in Minneapolis but in a really big way," said Jill Evenocheck, former Director of Special Events for the Minneapolis Downtown Council, which puts on the Aquatennial.

On July 17th, 1998, the Smashing Pumpkins partied like it was 1979, taking center stage in an empty parking lot as the headliner for the Hennepin Avenue Block Party.

Organizers say at the time, the band was at height of its popularity and wanted to perform a free concert somewhere in the U.S. and Minneapolis was the only city that said yes. 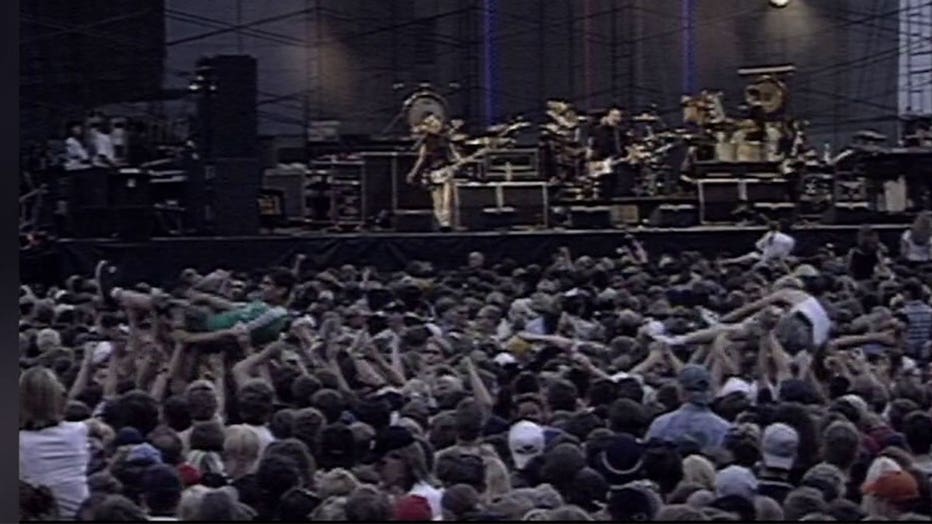 The Smashing Pumpkins perform to a massive crowd at a block party in Minneapolis in 1998. (FOX 9)

"I give a lot of credit to the mayor at the time, Sharon Sayles Belton who said 'let's do this'. We had a very vibrant music scene during that time. We were doing outdoor concerts every night over by Orchestra Hall and Nicollet Mall, and it was just another thing to add to get people to come downtown," said Evenocheck.

An estimated 100,000 to 125,000 people descended on downtown for the two-hour set, turning Hennepin Avenue into a sea of people.

It was so crowded, some fans watched the show from the top of parking ramps, while others climbed trees and light poles to get a better view.

"I think a lot of the people there, they didn't know who Smashing Pumpkins were. They knew it was popular. It was free. It was rock and roll. It was a nice sunny night. Let's go party in downtown Minneapolis," said music critic Jon Bream, who reviewed the concert for the Star Tribune newspaper.

Despite the large crowd, there were few incidents.

A woman convicted of second-degree murder reportedly walked out of a minimum security facility to attend the concert, but police picked her up after the show.

In the years that followed, the concert gained legendary status, but in the end for Minneapolis, taking a chance turned out to be a smashing success.

"It's one of those concerts that people talk about, want to say I was there. No one knows how big it was, but it was huge. It was massive, and it's part of Minneapolis' music history," said Bream.