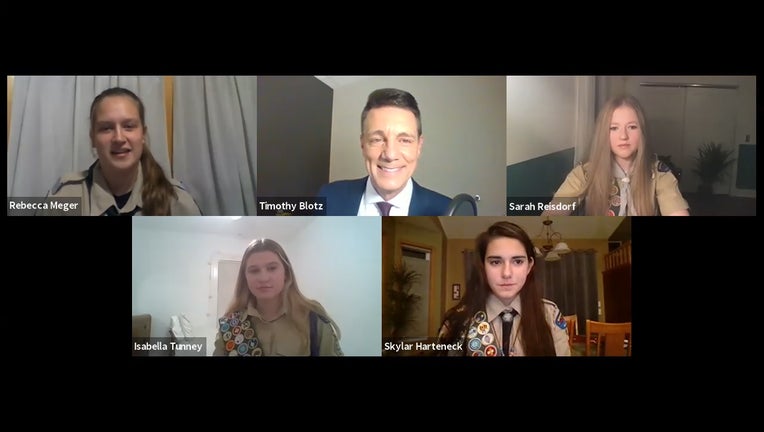 (FOX 9) - Four teenage girls are setting new standards on paths that were once exclusively for boys. Skyler Harteneck, Isabella Tunney, Sarah Reisdorf and Rebecca Meger are the first four girls in the Northern Star Council to become Eagle Scouts, the highest rank in Scouts BSA, previously known as the Boy Scouts.

There are 625 girls now in the ranks of the Northern Star Council. For these four young women, Scouting was a family affair.

Four young women are now the first girls in the Northern Star Council to become Eagles Scouts, the highest rank in Scouts BSA.

“My dad was Cub Master and is currently and assistant Scout Master,” said Meger.

“My brother grew up in Scouting, so I was going to all of the campouts, and helping with service projects,” said Reisdorf. “So, I figured out that girls would be able to join Scouting, I thought it would be a great opportunity do some fun things, get to see new places.”

It takes 21 merit badges to achieve the rank of Eagle Scout, but these girls are over-achievers.

“I have I think 54, or 55, I can’t really remember,” said Hardeneck. “And I do have a favorite. My favorite by far was aviation, because I got to fly a plane and that was a really cool experience.”

“So I have 137 merit badges, which is all of them, and I’m currently one of two girls in the nation who has done so,” said Tunney.

Tunney’s journey has taken her from welding shops to white water kayaking to the White House.

“And the best thing about my merit badge journey is that I got to try out all these new experiences that I really would not have done at school or at home,” said Tunney. “It’s really unique to Scouting to be able to try out of all these things.”

“Going forward being an Eagle Scout is something you always continue to be and be an example to others,” said Meger. “And your leadership shows in everything we do whether it’s holding a door open for someone or teaching them how to do something they’ve never done before.”

Together, they show the future is in good hands.

“What I think what I’ve grown more in is leadership skills and knowing how to organize people and delegate and all that type of deal,” said Reisdorf.

“And so the program is just a lot better and just and incredible thing and it was especially and amazing experience to have,” said Tunney.

To put this in perspective, only six percent of everyone in Scouts ever reaches the rank of Eagle Scout.