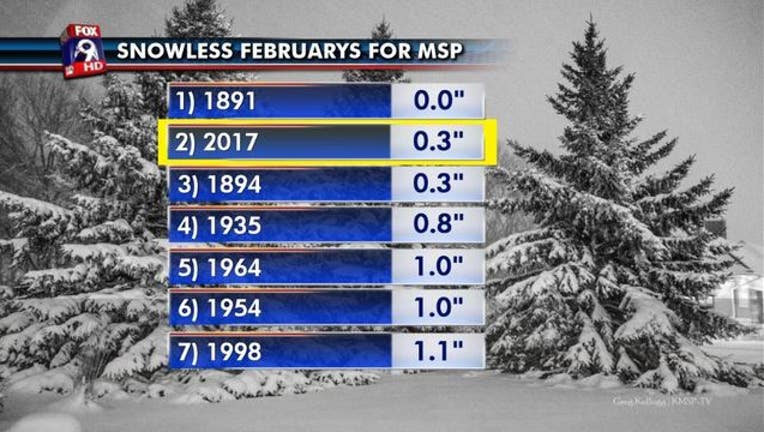 KMSP - February certainly hasn’t lived up to what we have grown accustomed to.  The typically frigid month rounding out our winter season has been anything but.  2 straight weeks of record and near record warmth has allowed any and all snow in the metro to melt away… combine that with over a half inch of RAIN, and it’s been unusual to say the least.  While February is our driest month of the year on average, and this one will likely be no different, it’s the fact that we have had almost no snow at all that’s been the most unusual part.  This month will likely tie for 2nd place on the least snowy months of February on record… dating back to 1872.  Only the February of 1891 has been completely snowless.  The last time the month has been this flake free was 1998, when just over an inch of snow fell.  This year bucks the trend of snowy Februarys we have had in the 21st Century.  In fact, 4 of the top 10 snowiest Februarys since 1872 have occurred over the last 17 years including 2014 and 2011… both years had over 16 inches of snow.  What’s even a little more mind-blowing is that MSP Airport missed out on more than a foot of snow with this last storm by just 35 miles.