Father of daughter with Down Syndrome releases awareness album

The father of a girl with Down Syndrome has recorded and released an album to tell her story.

MOUNDS VIEW, Minn. (FOX 9) - Alyssa Norell has all the gifts that a little girl with Down Syndrome could ever give.

"She is such a joyful girl," says her proud father, Jesse.

It sometimes helps to have a guitar in front of her.

Born into a musical family, this little girl of six, a kindergartener, knows the joys of her father’s guitar and a mother and brother who like to compose songs and make YouTube videos. And now, the story of Alyssa’s young life is the staff paper for an entire album of new songs to raise awareness about Down Syndrome.

Part of the Alyssa’s story begins the day she was born. She was diagnosed with a rare heart condition called Atrioventricular Septal Defect, sometimes referred to as AVSD. It’s a condition where the heart has a hole in a ventricle wall. 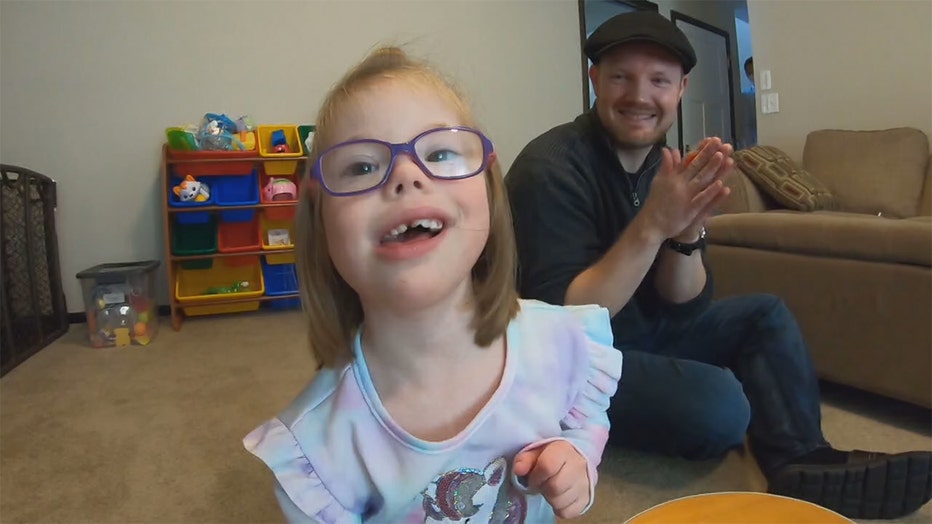 A father of a girl with Down Syndrome has recorded and released an album to tell her story.

In Alyssa’s case she had several holes, but in two surgeries at Children’s Minnesota Hospital Dr. Frank Moga repaired them.

"They’re such experts and they were never worried," said Jesse about Dr. Moga and the medical team at Children’s Minnesota. "Parents are always worried, but the staff never worried because they do this every day and they’ve done it before and they know exactly how to use their tools in just the right way. And it’s phenomenal."

Alyssa’s prognosis is now so good that she only has to return to Children’s once a year for a cardiogram.

Which is why you’ll often see her singing along with her father as he plays his guitar.

"If people can get to know my daughter through listening to this story through hearing this album, then maybe any preconceptions they have about kids with Down syndrome or, you know, kids that are in and out of the hospital or whatever it may be might change for them a little bit," said Jesse.

The album Aorta Borealis is now streaming on Spotify.

The album is also available for purchase.

Additionally, the Norell family is holding an album release party at the Parkway Theater in Minneapolis on April 8.