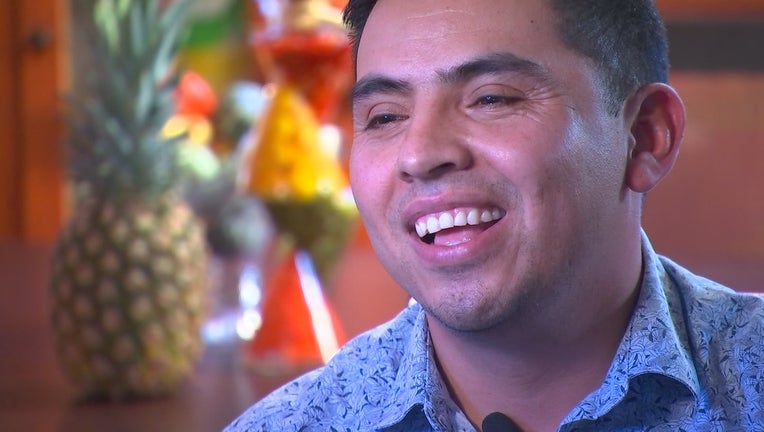 Armando Enriquez was all smiles after getting a temporary stay to remain with his son. (FOX 9)

ST. PAUL, Minn. (FOX 9) - A man facing deportation has had his wish granted, at least temporarily, as immigration officials have allowed him a stay while his son faces a disorder that may require a bone marrow transplant.

Armando Enriquez tells us he doesn’t ever want to be separated from his family again and he had a whole lot of people advocating on his behalf to get him home.

A man facing deportation has had his wishes granted, at least temporarily, as immigration officials have granted a stay while his son faces a disorder that may require a bone marrow transfusion.

After about a month, the prayers of the family in St. Paul were answered.

"My kids ran to me and we were so excited, and the tears coming down and to see my wife," recalled Enriquez with help from a translator.

Enriquez, a father of three, was reunited with his wife and children on Thursday after spending the last month detained by ICE in Minnesota and Louisiana.

Enriquez said of his native country Honduras, "there really isn’t love among each other; there’s so much crime, the crime for children also, there’s not an opportunity."

According to an ICE official with knowledge of the case, the 38 year old has been removed from the country two other times and was about to be deported again.

Enriquez got a lawyer and his story started to gain traction. Elected leaders, from St. Paul Mayor Melvin Carter to U.S. Senator Amy Klobuchar, wrote letters to ICE asking for a humanitarian stay. Enriquez’s six-year-old son Jairo has a rare genetic condition that will eventually require a bone marrow transplant, and Enriquez wants to be here.

"My priorities have always been my children, my wife, and God," he said.

On Thursday, Enriquez learned he had been granted a six-month temporary stay of removal so he can remain with his son.

"I had a great amount of happiness in my heart to know I was going to be able to be with my family again," he says.

Enriquez and his family are enjoying the time they do have together and are grateful for the help along the way. However, they know the battle for families like theirs isn’t over.

"We’re all looking for an opportunity and that’s what I want to say: don’t separate us," he said. "And we want to be able to do the things here legally and be here legally."

Both Mayor Carter and Senator Klobuchar responded to the news Friday, telling us they are happy Enriquez can be with his son during his treatment.

While Enriquez will eventually be deported under the current law, his lawyer can continue to request a stay while his son is receiving treatment.

"We are very pleased that Mr. Enriquez is back at home with his family. His safe return brings hope to so many in our community who supported efforts to get him home.”

“I am relieved to hear that Armando Enriquez’s stay was granted and that he will be able to remain in the U.S. given his need to care for his son Jairo through his bone marrow transplant surgery and other treatments that are necessary to address his rare genetic disorder. No family should be torn apart in their time of need, and I am glad that our office was able to support Armando’s efforts to remain with his family. Our thoughts are with Jairo during his surgery and recovery.”