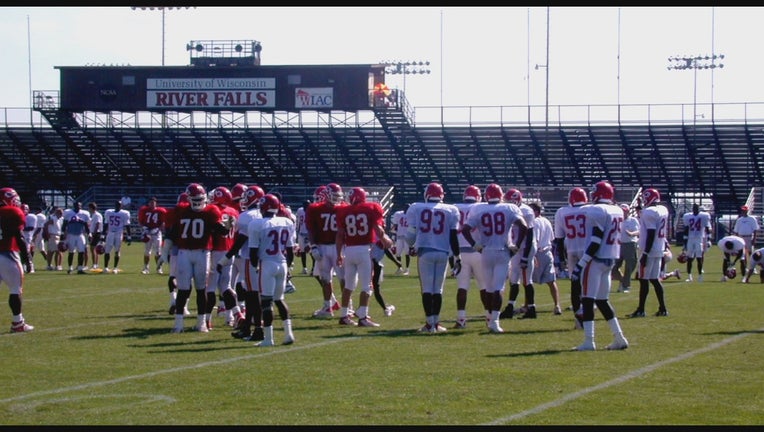 The Kansas City Chiefs held their training camp at the University of Wisconsin-River Falls from 1991 to 2009. (UW-River Falls University Archives and Research Center)

RIVER FALLS, Wis. (FOX 9) - The University of Wisconsin River Falls is part of Packer Country, but there's a special reason a lot of folks in the area will be rooting for the Kansas City Chiefs to win the Super Bowl on Sunday.

"The joke used to be they are our favorite AFC team," said Steve Stocker, the UW-River Falls campus recreation director.

Why there's a pocket of Chiefs fans in River Falls, Wis.

The Chiefs held training camp at UW-River Falls for years, helping foster a small fanbase of Chiefs fans who will root for the team when they aren't cheering for their Packers.

A parking lot now sits where the football fields at UW-River Falls once stood – the fields that used to be the summer home of the Chiefs.

"A lot of Packer fans, but of course our beloved the Kansas City Chiefs who spent 19 years here," said Stocker.

From 1991 to 2009, the team held training camp on the UW-River Falls campus. University officials say the Chiefs coaches wanted to eliminate distractions for the players and give them a break from the hot and humid weather in Missouri during the dog days of summer.

For three weeks every summer, diehard fans would make the 6 1/2 hour trek from Kansas City for the chance to see their favorite NFL players up close and personal. Local kids would also ride their bikes down to the campus to hound the players and coaches for autographs and watch scrimmages. The Chiefs played against other teams in the so-called "Cheese League," which had training camps in the area like the Vikings, Saints and Chicago Bears.

"I came down here as a little kid and watching them I felt like a part of the team,” said Chad Flanegan, who will be rooting for Chiefs. "That was the closest I'd ever come to NFL players. Seeing them so large. They were like Superman."

The Chiefs helped pump up to $2 million a year into local businesses like Johnnie’s Bar on Main Street, where bartender Patti Lindquist remembers the time she made Chiefs Defensive Coordinator Art Schell a special cocktail.

"I made him a girly drink,” said Lindquist . “He loved it. When he came back the next year, he had it again and he was like, 'You remembered!'"

Workers at the bar say they will be cheering them on Super Bowl Sunday.

"I'm going to root for them just cause,” said Lindquist. "Why not?"

There's only one player who is still on the team from when the Chiefs had training camp in River Falls - punter Dustin Colquitt. His brother, Britton Colquitt, happens to be a punter for the Minnesota Vikings.