His siblings Philonese and Rodney, his cousin Shareeduh Tate and his nephew Brandon Williams described what the Floyd family house was like growing up, shared stories about Floyd's sense of humor and showed how he helped raise a fatherless household in Houston, Texas. Plus, his nephew talks about their shared love of sports.

MINNEAPOLIS (FOX 9) - At the memorial service for George Floyd in Minneapolis Thursday, Floyd's extended family described what the Floyd family house was like growing up, shared stories about George’s sense of humor and talked about how he helped raise a fatherless household in Houston.

Philonise Floyd, George's brother, said the family did not have much, but they always had each other. He described the family as doing everything together, from sleeping in the same beds to playing catch with the football to eating banana-mayonnaise sandwiches.

“He was teaching us how to be a man because he was in this world before us,” said Rodney, George's youngest brother.

George’s siblings and cousin described the family’s house as always welcoming. The neighborhood kids called Floyd’s mom “Miss Sissy” and always wanted to come over because they knew they would always get a meal. 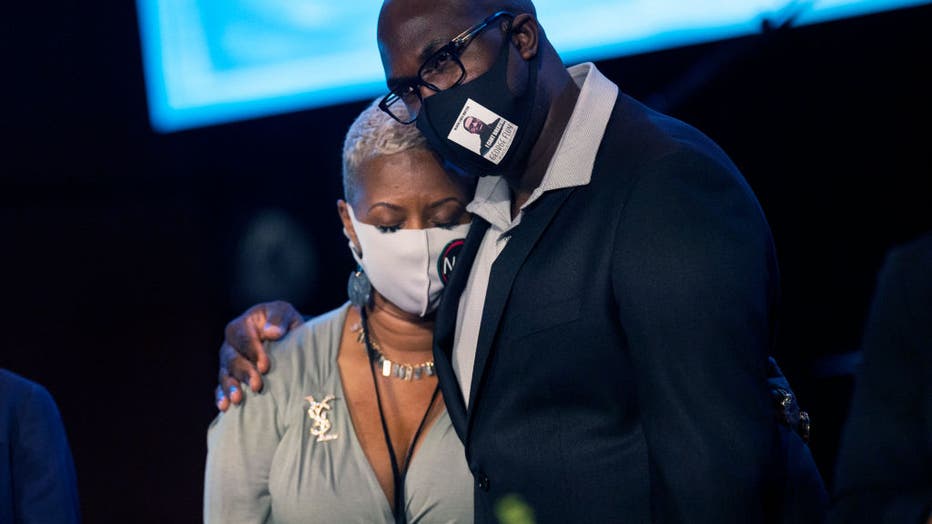 According to Floyd's cousin Shareeduh Tate, the family was taught they should always bring people “into the fold”—a lesson she said George learned particularly well.

“No matter who you talked to, they will all say the same thing, that George was somebody who was always welcoming, always made people feel like they were special,” Tate said. “Nobody felt left out. When he would enter into a room, everybody would feel as though they were special. He would embrace them.”

Family, friends, activists, and celebrities gathered Thursday to honor the life of George Floyd in Minneapolis

Philonise said everyone just wanted to be around George.

“George, he was like a general. Every day he walks outside there’d be a line of people wanting to greet him, wanting to have fun with him,” he said. “Guys that were doing drugs, smokers and homeless people—you couldn’t tell because when you spoke to George they felt like they were the president because that’s how he made you feel.”

“Everybody loved George,” Philonise continued. “He was powerful, man. He had a way with words. He could always make you ready to jump and go all the time.”

Rodney, George's youngest brother, added that George stood would always stand up for his family and friends and any injustice he saw.

George had five kids of his own and a three-year-old granddaughter, but he was also a father figure to his nephew, Brandon Williams, who lived with the family in Houston.

“We didn’t have much, but coming up, my grandmother she tried her best,” Williams said. “Wherever she slacked, [George] made sure he picked it up for me. He made sure I had sneakers and clothes and a lot of stuff like that.”

Williams said they bonded over sports, especially George’s love of the NBA.

“More than anything I just want to say thank you to him just for being there, just being a real genuine person, being loving and caring, and somebody I can count on no matter what.”

George Floyd was known by many nicknames, including "Big George" and "Big Floyd", but those who knew him best called him "Perry"

Tate said the thing she will miss about George the most is his hugs.

Philonise said he cannot believe the outpouring of support for George and the whole family and what his death has sparked across the country.

“It’s crazy, all these people came to see my brother,” he said. “That’s amazing to me – that he touched so many people’s hearts because he’s been touching our hearts.”